…. BUT THAT’S JUST HALF THE EQUATION

The US has belatedly come to see the need for taxes to be abolished if it is to resurrect its tax-devastated economy. However, it hasn’t come within a bull’s roar of realising that non-tax revenues must complement the slashing of taxation.

Although it’s now obvious to everybody that the sub-prime loans crisis was merely a pimple on a gargantuan real estate bubble, it is not recognised that the increasing privatisation of the public’s economic rent in the US since 1972 was the catalyst for both increasing taxes and escalating land prices. [The ills delivered to the state of California by Proposition 13 exemplify  how the capture of publicly-generated land rent was restrained in favour of taxes on productivity, so it’s no coincidence that the Governator has been supervising a basket case.  Goodbye Arnie!]

Real average weekly wages have actually declined in the US since 1972.  (And Professor Mason Gaffney suggests the recent uptick is actually more apparent than real!) 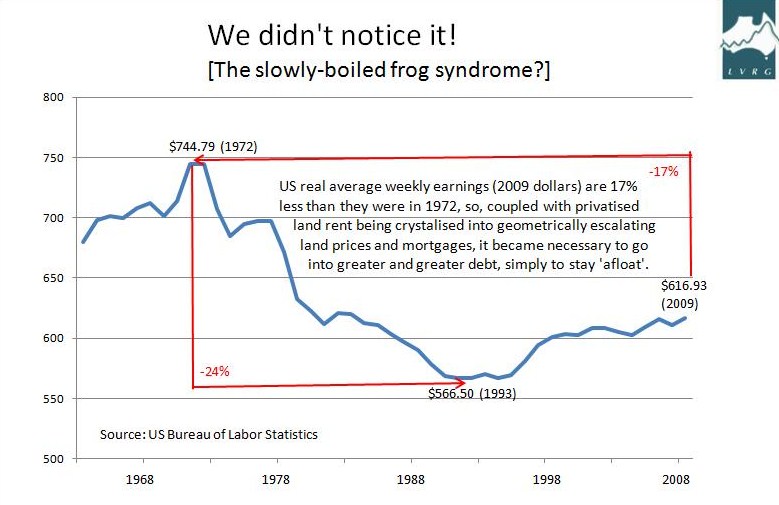 And while Joe Sixpack was losing out to powerful rent-seekers who’ve had increasing access to Congress’ ear over the last forty years, Joe’s been forced to take on more and more debt to keep his head above water.  Something had to give …… and it has.

Congress has to understand that it is not privileged rent-seekers who drive the US economy, but Joe and Joan Sixpack having a dollar or two in their pocketbooks. But the figures above speak for themselves; Joe Sixpack has been played for a sucker, and government has been complicit.

While they’re at it, members of Congress should take the time to understand the vast difference between taxes and natural resource rents: one impedes social and economic progress and the other doesn’t.

But they’ll not learn the difference from their neoclassical economic advisors who’ve been running this one-sided game for privileged rentiers. Bernanke, Geithner and their ilk ought to be sacked for incompetence.

Reducing taxes is only a good beginning. Capturing land and natural resource rents will restore Joe’s confidence that the US is once again headed in the right direction.

Where have all the economic gains gone? Mostly to the top. The economists Emmanuel Saez and Thomas Piketty examined tax returns from 1913 to 2008. They discovered an interesting pattern. In the late 1970s, the richest 1 percent of American families took in about 9 percent of the nation’s total income; by 2007, the top 1 percent took in 23.5 percent of total income.

It’s no coincidence that the last time income was this concentrated was in 1928. I do not mean to suggest that such astonishing consolidations of income at the top directly cause sharp economic declines. The connection is more subtle.

The rich spend a much smaller proportion of their incomes than the rest of us. So when they get a disproportionate share of total income, the economy is robbed of the demand it needs to keep growing and creating jobs.