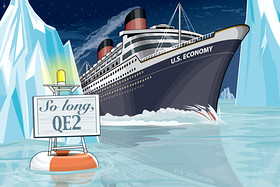 FOR WANT OF AN ECONOMIST

So, it looks like the US, not having learnt history’s lessons, is having the double dip it had to have, into the economic depression its rent-seekers designed so painstakingly.

It all went to plan. Barak Obama added the final touches. He’s a genius orator with those head-held-high, confident, statesmanlike speeches. Didn’t he and his wife charm England and Ireland?

Unfortunately – or should I say fortunately for Wall Street – Obama’s an economic ignoramus; but that’s why they bought him, knowing that he who pays the piper will always call the tune on tweaking the levers of the economy. [They certainly didn’t have to worry about his advisors!]

They convinced Obama to bail out the banks so they could all be paid their bonuses for lining the plutocrats’ pockets with the people’s rent. Though abysmal in the extreme, this was followed with the equally execrable QEs 1 & 2 to make it appear the economy was actually improving, rather than beginning to plumb the depths.