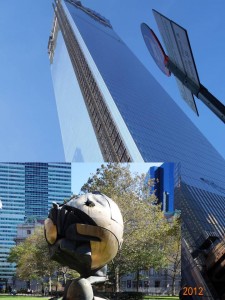 9/11 (2001) was a despicable terrorist attack that changed America forever. Then, Hurricane Katrina struck to destroy New Orleans and surrounds in 2005. This was followed by the 2007 to 2009 stock market crash, and now Super Storm Sandy hits the east coast on 29 October with horrific results across Atlantic City, New Jersey and New York.

And that’s not to mention a number of wildfires and other hurricanes to which the nation has been subjected in recent years.

So what’s next for Americans? They’re surely overdue for a run of good luck.

In my visit to the US, I took the opportunity to take a peep at The Wall Street Journal and the New York Times. I thought the appearance of the Times, particularly, came up short in comparison with The Age at home in Melbourne, where the pictures are eminently sharper and more visible on a superior quality paper. I reckon our layout is better, too. But newspapers are struggling pretty well everywhere.

Interestingly, I believe I obtained my best information, not from newspapers nor television, but from speaking with a number of seemingly ever-friendly Americans, despite being beset by mounting natural and social disasters. Not journalists, not ‘experts’: people with everyday cares. People in Central Park, bus drivers, waiters, people in hotels and airports, “Occupy New York” demonstrators who know something at the top is also politically amiss and want it fixed.

I was particularly interested, of course, in how people had adapted to the financial collapse, because that’s a man-made occurrence that the nation has in its power to turn around.

Not once was I let down in talking with Americans; their analyses were always considered and thoughtful. Especially Tony, who took us on a tour of the Hollywood, Beverly Hills area. I’d vote for him if he stood as my political representative in Australia.

Natalie, the young New York waitress, had first disabused us that America didn’t appear to be suffering. “You don’t see that we’re holding onto our jobs – if we have one”, she said, “and not contemplating changing it. You don’t see that we are desperately paying down debt and amending our spending to go without in many areas. This has a compounding affect and it certainly impacts on our lives.”

“You’re Australians?” young singer-songwriter/waiter Scott asked us at Universal City in Los Angeles. “You haven’t had a financial collapse yet, have you?” he asked.  “We’re on our way to a national debt of $17 trillion”, he volunteered. “Well, you’ve actually just gone past $16 trillion”, I said, surprised, because I’d not revealed my particular interests. (Perhaps it must show, I thought.)  For a minute or two an exchange on economic matters ensued before Scott had to attend to another customer.  He returned later during our meal with what I think must have been a couple of Midoris “Compliments of the manager for our Australian visitors.”

The pleasantness and professionalism of Americans we met was more than impressive. Unfortunately, our service doesn’t always come up quite so well back home.

The most common thread in speaking with people was that they believed they were being dudded by the big guys at the top politically–whether Democrat or Republican–that, and the banks.

Something basic needs changing came through again and again.  Although people want change, there’s not much sign they’re getting any.

It was only when I had a good chat with Justin at “Occupy Wall Street” that I let my proclivities slip by mentioning that I know Michael Hudson.  “Oh, Michael’s spoken here”, he said, handing me a copy of The Debt Resistors’ Operations Manual:  “It’s free.” He mentioned he’d been attending “Occupy” at Trinity Church Wall Street (on Broadway) for 158 days.  I made a donation.

Natural catastrophes and 9/11 aside, most Americans are clearly doing it hard during the country’s financial demise. Add the natural disasters back in, and daily life amounts to a quiet heroism for many.

It’s a shame they allow the tax and political system to divide them and to create such pettifogging hatreds.