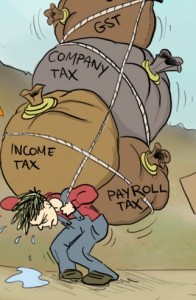 … ABOLISH TAXES AND PAY THE RENT

I hyperlinked my last post to Taylor Caldwell’s attack on income taxes. It echoed Thomas Jefferson’s warnings that, by having citizens of America work for government, income tax would enslave them.

In view of these incredibly strong words, why do we simply accept the levying of income taxes today?

The Progressive Income Tax equates to slavery? Certainly. Enormous bureaucracies are engaged looking into our private business affairs. Big Brother has been with us for quite some time.

And, if we acknowledge the current inability of nations such as Portugal, Ireland, Italy, Greece and Spain to meet their international liabilities, it may indeed be seen that the peoples of these nations have been made slaves to their creditors; they’ve been subordinated to debt and bank bailouts. People matter only insofar as they will underwrite these debts with their incomes for two or three generations.

And it’s not to draw too long a bow to add the USA to the top of the sovereign risk list. Britain might also be thrown into the mix.

However, these countries will prove only precursors of every country on the face of the earth, because we’re having the economic depression of all depressions if you are able to pierce through the veil of media denial, folks.

How then did we ever come to accept income taxes?

Income tax was introduced at the federal government level in the USA as a WWI measure, and in Australia during WWII. Governments knew that war emergencies were the only manner in which people would ever accept the introduction of an income tax nationally at the time.

But the oligarchy’s job was done and we succumbed to it by not insisting income tax be revoked after the wars. We thereby made ourselves slaves in fact.

As much as I don’t care for the ideas of the Tea Party movement, it is undoubtedly correct to identify income tax as problematic. Unfortunately, the Tea Party doesn’t understand how economies work, and in this it is like just about everybody else.

If economists and others came to understand the economic distributional relationships between the returns to natural resources, labour and capital, P = R + W + I, they’ll see there’s no place for taxation, that ALL taxes on earned incomes enslave citizens, people who comprise the backbone of economies, and that they may be liberated only by the public capture of publicly-generated land and resource rents.

Of course, the oligarchy wrongly believes it’s in its interests to keep them ignorant of these facts and under the serfdom of depression-inducing taxation. It’s not, because even the oligarchs are going to suffer big time in this one.

OTHER TRAGEDIES: DROUGHTS AND FLOODING RAIN

Few countries are free from devastating natural phenomena of one sort or another, whether it be bushfire, cyclone, tornado, earthquake, volcano, flood or landslip.

In February 2009, 173 Victorians were tragically killed in bushfires. Twenty is unlikely to be the final number of those drowned in the floods of south-eastern Queensland last week. This week lesser, but nonetheless devastating, floods have now been visited upon people in many parts of rural Victoria.

Dorothea Mackellar’s touching “My Country”, of which most of us know smatterings, told years ago of the drought and flooding rain that do not lessen her love (nor that of most Australians I would think), for the beauty and terror of a country that she says is no England. I can’t reproduce the poem here because agents for the estate of Dorothea McKellar have extended the copyright and won’t allow me to do so, but why not Google it if you want to read it in its entirety?

Meanwhile, those Australians remaining bereft as a result of fire, flood and drought still require our assistance. Our perverse system of revenue will ensure, however, that it proves to be hopelessly inadequate.  🙁