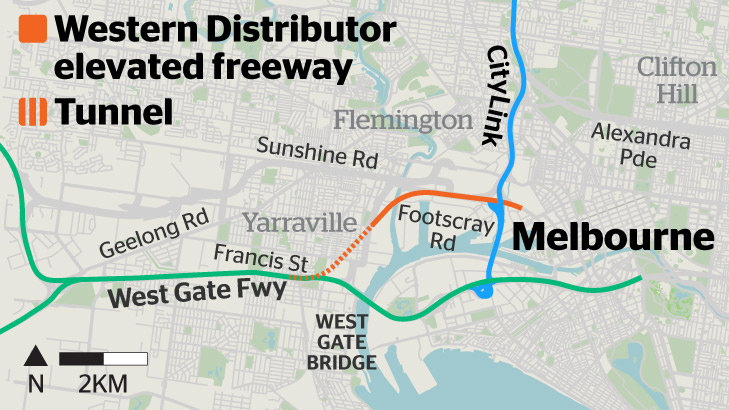 Victorian Premier Daniel Andrews is considering a second connection between the West Gate Freeway (near Francis Street) and CityLink to the east, via a tunnel and an elevated roadway. Offering an alternative to the West Gate Bridge, it’s not a bad plan at all. It would reduce traffic and cost some $5.5 billion.

The main problem is that the plan has been proposed by Transurban, the tollway king which has already privatised eleven Australian roads – and existing CityLink tolls will need to be extended until 2050.

The Premier is impressed because a tollway won’t cost the State budget anything at all. But it will cost Victorians heaps!

This is a wrong-headed application of the ‘user-pays’ principle. For the sake of getting the costs off the back of the State government, those who use the new tollway will have to pay heavily for the privilege over next thirty-five years, and Transurban will reap massive rewards over the period.

“What’s wrong with that?” do I hear those at the Institute for Public Affairs cry?

First and foremost, what has become of the ancient right of all to the freedom of the highways and byways? Tollroads are progress? Isn’t it rent-seeking that has delivered the world into the current depression? Rent-seeking has come at a terrible cost to our productivity, yet Transurban’s rent-seeking in Victorian roads is to continue apace!

There are other ways to consider whether a capital works project is a goer, but the best way  is to see how it affects land values. If it lowers them or raises them only marginally, you kill a proposal off. You can bet that this new access would generate an uplift in land values of billions of dollars, not just in Melbourne’s west, but also to its north and east. There would be a massive aggregate increase in property values across Melbourne, and beyond.

So the real beneficiaries are not only those who would use the new connection, but all Victorians who would benefit from the efficiencies, savings and superior traffic flows the project would deliver. These benefits, spillovers or externalities are clearly reflected in the varied rates of increase in property values, mainly across Melbourne, and should be captured back via a charge on land values. This would be over a much shorter term, and at far lesser cost to motorists and Victorians, than using Transurban.

The only stumbling block to taking the correct action is that we have an antiquated land tax system in Victoria that urgently needs to be reformed to include all Victorian properties.

To continue paying rent-seekers in economies that are crumbling due to excessive rent-seeking in our natural resources is simply to continue the madness.

The time for reform is now. We don’t need new tollways.