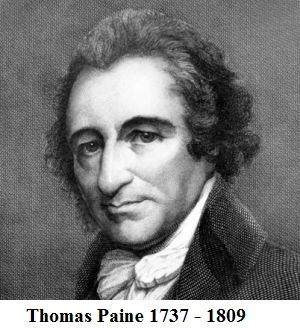 In taking up any public matter, I have never made it a consideration, and never will, whether it be popular or unpopular; but whether it be right or wrong. The right will always become the popular, if it has courage to show itself, and the shortest way is always a straight line. I despise expedients, they are the gutter-hole of politics, and the sink where reputation dies.

Thomas Paine famously wrote in the first Crisis paper, “These are the times that try men’s souls.” Certainly, his own experiences following the years working for American independence from Britain reveal that those times never really ended.

Over the centuries, some number of people in every society have been able to reach adulthood and labor to gain an income sufficient to raise a family. A smaller percentage of the population have become property owners and passed on an estate to heirs. Yet, for a majority of the people in almost every society for almost all of history, “normal” meant a life of endless poverty with no opportunity for a decent human existence.

Widespread poverty began to appear in societies once people settled into one place rather than continue to migrate in search of game and live off what nature provided. Settlement brought on the need for rules under which access to land, to water and other natural resources would be allocated. Tribal societies eventually abandoned their communitarian existence, replaced by hierarchy and privilege. Warrior subgroups often acquired aristocratic, inherited status and power. The knowledge-bearers gained status and power as the self-proclaimed intermediaries with the gods. Religion was born. The rest of the people in every society were charged with producing what all needed to survive as well as what the two leading subgroups demanded. Elaborate rituals, legal codes, intimidation and outright force were from this point on employed to acquire and hold power and wealth.

When Thomas Paine left the Old World for North America, he expected to find a far less hierarchical societal structure, communities in which the opportunity to rise above the station of one’s birth existed — as reflected in the person of his new friend, Benjamin Franklin. What Paine found upon arriving in Philadelphia was a city and a colony much changed during the years Franklin had been living in England. These changes are described by historian Jackson Turner Main in his myth-challenging 1965 book, The Social Structure of Revolutionary America:

The wealthiest 10 percent owned about half of the inventoried property in Massachusetts, 40 percent in New Hampshire, and 45 percent in New Jersey, the last figure being average for the North. (p.42)

Despite … significant local variations, the United States in the revolutionary era contained a general economic class structure which can be identified and described. …[S]ome 10 percent of the whites at the top, consisting principally of large landholders and merchants, held, as a rule, 1,000 [pounds] or more in personal property and the same amount in land. These men owned nearly half of the wealth of the country, including perhaps one-seventh of the country’s people. (pp.66-67)

Already, Europeans and their descendants had displaced, annihilated or caused the deaths by disease of hundreds of thousands of tribal peoples who for thousands of years had lived east of the mountain chain that today has become the Appalachian Trail. By the time Thomas Paine was writing Common Sense, frontiersmen and traders were moving west across the mountains, craving freedom from oppressive colonial governments dominated by wealthy landowners. Settlers migrated west in search of land that could be had cheaply or even free, accepting the very real risks of life well beyond the protections larger communities provided along the Atlantic coast and the inland passageways such as the Hudson and Potomac Rivers.

Rarely did Thomas Paine’s powers of analysis and observation fail him. Yet, as late as his writing of Rights of Man, he was blind to the degree to which the new American System was plagued by hierarchy and privilege. He observed:

If there is a country in the world, where concord, according to common calculations, would be least expected, it is America. Made up, as it is, of people from different nations, accustomed to different forms and habits of government, speaking different languages, and more different in their modes of worship, it would appear that the union of such a people was impracticable; but by the simple operation of constructing government on the principles of society and the rights of man, every difficulty retires, and all the parts are brought into cordial unison. There the poor are not oppressed, the rich are not privileged. Industry is not mortified by the splendid extravagance of a court rioting at its expense. Their taxes are few, because their government is just; and as there is nothing to render them wretched, there is nothing to engender riots and tumults. (Rights of Man, [1], p.164)

Of course, as the years went by, Paine eventually began to see more clearly that independence from Britain and the formation of republican government left serious problems to be addressed. Paine expressed his deep fears directly to George Washington in his infamous open letter of  30 July, 1796:

There was a time when the fame of America, moral and political, stood fair and high in the world. The lustre of her Revolution extended itself to every individual; and to be a citizen of America gave a title to respect in Europe. Neither meanness nor ingratitude had been mingled in the composition of her character. …

Monopolies of every kind marked your administration almost in the moment of its commencement. The lands obtained by the Revolution were lavished upon partisans; the interest of the disbanded soldier was sold to the speculator; injustice was acted under the pretense of faith; and the chief of the army became the patron of the fraud. From such a beginning what else could be expected than what has happened?…

However, in his open letter to Americans published in 1802, he put the blame not on systemic flaws but on the ideologically-driven policies of the Federalists :

But while I beheld with pleasure the dawn of liberty rising in Europe, I saw with regret the lustre of it fading in America. In less than two years from the time of my departure some distant symptoms painfully suggested the idea that the principles of the revolution were expiring on the soil that produced them. …

But a faction, acting in disguise, was rising in America; they had lost sight of first principles. They were beginning to contemplate government as a profitable monopoly, and the people as hereditary property. …

He saw the election of Thomas Jefferson as a sign that the spirit of democracy was restored. On this, he was, sadly mistaken. A huge, sparsely settled continent provided a safety valve for a growing population. Yet, long before historian Frederick Jackson Turner declared the frontier closed, Old World problems had emerged in every major part of the new nation. Paine endeavored to guide Thomas Jefferson along a path designed to preserve and expand the Democracy as the continent was populated. On the 25th of  January, 1805, he wrote to President Jefferson:

Next to the acquisition of the territory and the Government of it is that of settling it. …These matters though they do not belong to the class of principles are proper subjects for the consideration of Government; and it is always fortunate when the interests of Government and that of humanity act unitedly. …

I have found nothing in the letters or other writings of the last few years of Paine’s life that suggests he was anything but certain that Jeffersonian principles would prevail into the distant future. I suspect he would have been astounded by the level of corruption that came to characterize the American System during the 19th and 20th centuries. The author of Agrarian Justice would see great wisdom in the establishment of a social safety net for the nation’s more vulnerable citizens. Yet, he would likely be perplexed that we have yet to solve the great land question so important in the discourse of his era among political economists and other thoughtful individuals. The concentrated control over land and natural resources increases at an increasing rate. As a result, our societies are dominated today by a rentier elite, a minority whose accumulation of income and wealth impose enormous stress on our economies and threaten the democracy the securing of which cost so much to obtain.