Except for some sort of miracle, Australia is going to have a Liberal Party government from September 8th.

The budgetary shortfall of $30 billion in the Liberals’ promises won’t count against them.

These things only matter to ‘welded on’ Labor supporters.

However, nether was it Kevin Rudd’s pink batts, nor his mining tax, nor Julia Gillard’s carbon tax, nor the minority government, nor Labor’s economic competence that sealed its doom.

Those issues matter only to ‘welded on’ Liberal supporters.

Journalists might run through a litany of possible contributors to the swing against the government and to the opposition, but they will always miss out on the one critical element.

It is what usually–if not always–removes the government of the day:-

It is only the swinging voters who will ensure there’s a change of government. More particularly, swinging voters (a) who have taken out a mortgage in the last few years, or (b) who are currently unable to afford a home.

(a)         because this group is finding it increasingly difficult to service their bubble-inflated mortgages, and believe the Labor government is totally responsible for this, and

(b)         because the frustrations of this group have also spilled over onto the incumbent government.

Oppositions do not win elections, governments lose them. However, the primary cause–how the “hip pocket nerve” is faring–seems always to become lost and invisible to journalists and punters, even to the swinging voters themselves. This is because we tend subconsciously to project any personal budgetary shortfall onto some aspect of the government other than the subliminal concern of the swinging voter: housing affordability. 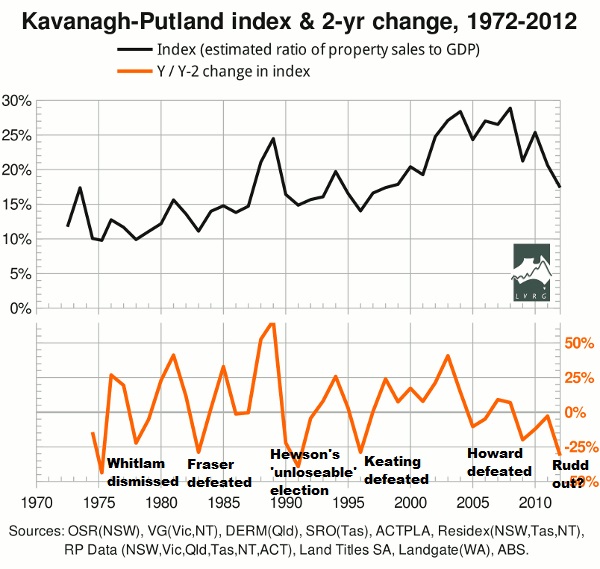