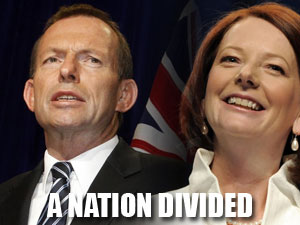 … A WIN FOR DEMOCRACY?

Like the Americans, we can get pretty rabid over our two big political parties.  Nevertheless, in government they turn out to be Tweedledum and Tweedledummer once they’ve performed the ritualistic kowtow to banking and big business.

For example, Australia can trump Barack Obama’s incredibly stupid appointment of Timothy Geithner as Secretary of the Treasury with PM Julia Gillard deferring to the big miners by lowering Kevin Rudd’s proposed 40% tax on their profits (which acknowledged Australian ownership of its resources), to an effective 22.5% rate (which doesn’t).

Whether yesterday’s ‘hung’ election delivers a minority Labor or Liberal conservative government, they’ve both now got to consult with the three conservative independents and two new Green-flavoured members of the lower house.  (See their photos below.)  Which is not to say they’ve got to cave in to them holus bolus, but at least they will have to listen to them.

To which I shout:  Hallelujah!

Our shock jocks of the radio will, of course, beat their breasts, crying that this has delivered ‘unstable government’ to Australia, but I believe we may have matured more than America … to have moved a little closer towards democracy.

Whoever coalesces to form the next government, the Greens will undoubtedly have effective control in the Senate.  Unlike the conservatives, they acknowledge the need to capture our mining resource rents and, thankfully, seem to understand that we need a pollution charge, instead of a derivative-like pollution trading scheme.  But the Greens have some maturing to do on water security and population policy.

Maybe the three independent conservatives, all of whom represent rural or regional areas will be able to convince themselves and Greens leader Bob Brown that Treasury Secretary Ken Henry’s mooted federal land tax (to replace the idiosyncratic array of state government land taxes, payroll taxes and stamp duty) will clearly be the most effective way to revitalize farming and regional areas, because land values are lower in those locations?

Meanwhile, with democracy, land and resource value capture all in the air, Australia seems better placed than any nation in the world to remedy the Global Financial Crisis.

This election result makes me confident that Australians now have the wit to find their way out of this nonsensical rent-seeking maze.

But as the property crunch is about to impact upon Australia, the new political arrangements and effective action will have to be sorted out pretty quickly. In this respect, I encourage people to catch tomorrow’s “Four Corners” program at 8:30 pm on ABC-TV 1.  I expect it will be long on describing why we are about to have a crash, but extremely short on pointing to abolishing taxes and capturing rents as the solution.  See if you agree!

Oh, for Kerry O’Brien, Tony Jones and Co. at the ABC to discover land and resource rents!  (Unfortunately, the bods at the commercial TV channels will never be permitted to do so.)

Thanks toYahoo for the photos.