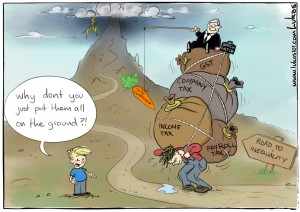 MAYBE IT EXPLAINS WHY ECONOMISTS CAN FORECAST NOTHING?

I’ve alluded several times to Mason Gaffney’s engaging account of how universities such as Cornell were endowed and set up to kill off the idea advocated by many social philosophers throughout history, but especially as distilled and expressed so powerfully in Henry George’s “Progress and Poverty” in 1879.

Everyday people responded positively to the process so clearly described by George.  For the first time in history they were cottoning onto how much of the wealth they produce is stolen by taxation-promoting, parasitic rentiers.

This small but wealthy rentier band reacted urgently to George. His idea must be killed off quickly in universities by conflating land and capital. This new paradigm must be enforced within academe and Georgism excised from economics altogether. Its proponents should be excoriated and derided, and antagonists declaim that “economic rent is only a tiny part of the economy today anyway”.

Thus was the 18 year cycle of boom and bust set in concrete; thus did the earnings of the poor and middle class continue to be reduced by taxation; thus did rent-seeking parasites dine obscenely off publicly-generated economic rent; thus, as Mike Moore said in Madison Wisconsin last Saturday, do 44 US citizens accumulate unto themselves the same amount of wealth owned by 150 million of their brothers and sisters.

And so it has become de rigueur for modern economics to pooh pooh Henry George’s ‘fiscal adjustment’ to set economies aright; that is, to use the publicly-generated rent of land and natural resources, instead of taxation, for revenue.

“This theory [Georgism] still has its adherents, likeable and mainly older people, who overlook the fact that land rent forms such a small percentage of national income: that 2% is nothing to the present tax percentages, which are around 30.”

“George over-estimated the future importance of rents and rental income. Governments at every level have grown tremendously in the last century. Even if governments could take all rents without rebellion or severe recession, rents would not come close to covering expenses. In 1929, property rents accounted for about 6 percent of national income. The percentage has dropped to well under one percent today. Whereas property taxes once provided 65 percent of state and local budgets, they now supply about 17 percent.”

“The first surprising implication of this fundamental growth equation is that, in the modern world, land per person, which had completely dominated income determination before 1800, no longer matters in economic growth. This is because land rents have fallen to only a few percent of total output in modern high-income economies.  Figure 10.3 shows this trend for England. Farmland rents, which were 23 percent of national income in 1760, fell to 0.2 percent by 2000. In part this decrease was offset by a rise in the site rental value of urban land. But by 2000 urban land rents represented only 4 percent of national income, even in crowded England with its very high housing costs.”

Hmmm … so that’s 2 percent, well under one percent and 4.2 percent? Where lies veracity and intellectual rigour in these three opinions?

The truth is that it lies far from each of these poorly researched sources.

The first hint that land rent may be grossly understated in modern neo-classical economics textbooks came to me in the form of Dr JFN Murray’s excellently-researched valuation text “Principles and Practice of Valuation”, published by the Commonwealth Institute of Valuers in Sydney in 1969:-

“Economists have, because of the lack of a satisfactory basis for isolating and understanding the causes of economic phenomena, occurring in a world of infinite complexity, been compelled to develop their methodology within a framework of imaginary models and to show, by reasoning, how a given set of conditions is always and inevitably followed by particular effects. A phenomenon is then explained by showing that it is bound to occur by the operation of the set of conditions postulated by the hypothesis. The illustrations are, however, often vested with an air of unreality because, in the desire to achieve simplicity, the process of elimination is carried so far that the only factors remaining are more appropriate to the Garden of Eden. ….

The professional valuer with his insistence on demonstrative proof and acceptance of harsh realities has displayed intolerance of the tenuous abstractions of pure economics. His is a branch of applied economics, which takes into account all the complexities of land utilization and of commerce, and is closely aligned with scientific method, in that it depends upon empirical verification of hypothesis. ….

With some notable exceptions the principles of valuation are in general correspondence with economic theory, but a reintegration of the two sciences, which have been separated since the time of Adam Smith, would greatly advance learning.”  [My emphasis]

So, could the Land Values Research Group find an economist who might undertake impartial research into the real quantum of land rent within the Australian economy?  We did: Dr Terry Dwyer.  His paper “The Taxable Capacity of  Australian Land and Resources” provides a time series analysis of land rent from 1911 to 1999. It was published in the refereed academic journal Australian Tax Forum Volume 18 Number 1, 2003.

I have used Dwyer’s technique to extend his analysis to 2010 and constructed the chart below to put it into pictorial form. It assists to correct the nonsensical sort of economic rent estimations provided by Pen, Buchholz, Clark and others. 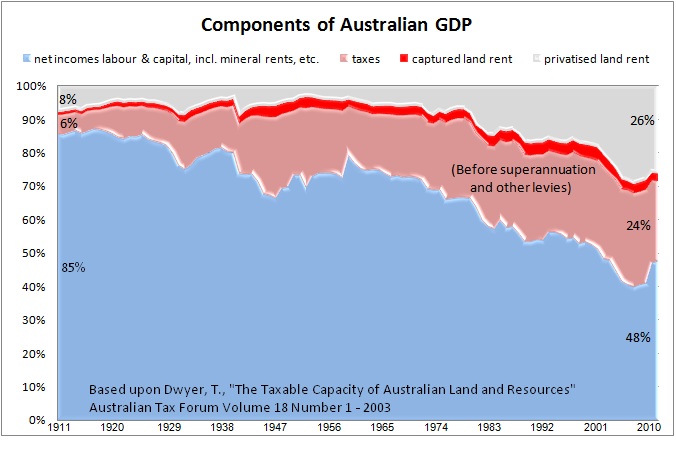 Even on Clark’s (highest) estimate of rent being only 4.2% of Australia’s c.$1.35 trillion economy, viz, $56.7 bn, this is suggestive of a capitalization rate of 1.5%.  As Dr Murray might have said: how totally unrealistic can economists get?

ps: I’m a professionally qualified valuer. Economists need to speak to us about the extent of land rent in the economy.

I’m not sure whether Pen, Buchholz or Clark were able to forecast the global financial crisis. Quite independently, Georgists in the US, UK and Australia did.

Maybe the Georgist school of economics is onto something?

Social reform is not to be secured by noise and shouting; by complaints and denunciation; by the formation of parties, or the making of revolutions; but by the awakening of thought and the progress of ideas. Until there be correct thought, there cannot be right action; and when there is correct thought, right action will follow. Power is always in the hands of masses of men. What oppresses the masses is their own ignorance, their own short-sighted selfishness. – Henry George, Social Problems, Chapter 22: Conclusion

2 thoughts on “THE GRAND LIE OF MODERN ECONOMICS”