Formation of the Culture of Genocide

The European Union is attempting to embed the culture of genocide in Bosnia and Herzegovina. Europe’s statesmen are not aware that this is what they are doing. This is another case of wilful blindness (see Thesis No. 9 in http://www.sharetherents.org/ ). But Europe’s laws on finance and property rights entail systematic killing and social discrimination that find their ultimate expression in ethnic cleansing. Under certain conditions, genocide is applied as a tool of Europe’s statecraft of greed.

To understand how these tragic outcomes flow from activities that most people now regard as innocent, we need to trace the way in which the culture of genocide was institutionalised in Europe as a social process. We have to sequence the events that unfolded over the course of 400 years. This enables us to identify the key stages and events that created the modern nation-state. That state emerged to propagate greed. And the avarice that defined the statecraft of greed could only be assuaged by the methodical application of genocide.

Step 1  Going back to the 16th century, we find that private violence was directed against communities, as aggressive individuals grabbed the lands that were held in common. What became the post-feudal aristocracy was motivated by the desire to reap the rents from those lands. In the process, people’s lives and whole communities were wrecked. 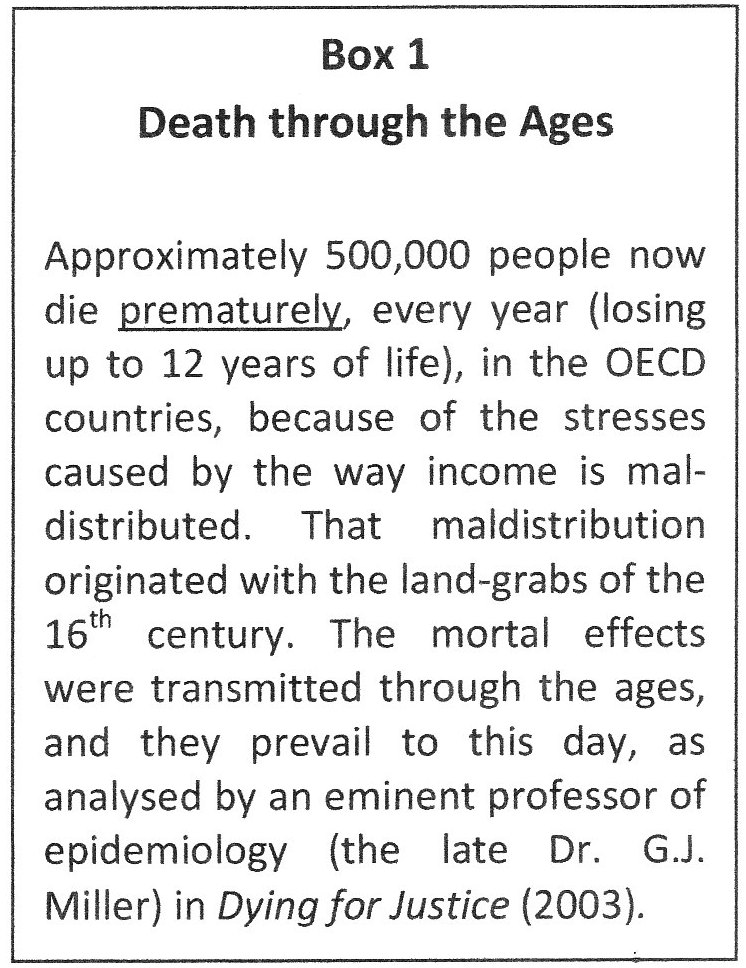 Step 2  An alien regime of private land ownership was systematically imposed on people. But to perpetuate that injustice, the new aristocracy had to capture the power of the state. Only then could the land-grabbers legitimise their “rights” in law. The “rule of law” thus became the law of the rent-seekers. The state became the tool of those who used violence to grab other people’s traditional rights of access to land, on which they depended for their livelihoods.

Thus was created the institutionalised process of violence, as sanctioned by the rule- of-law. 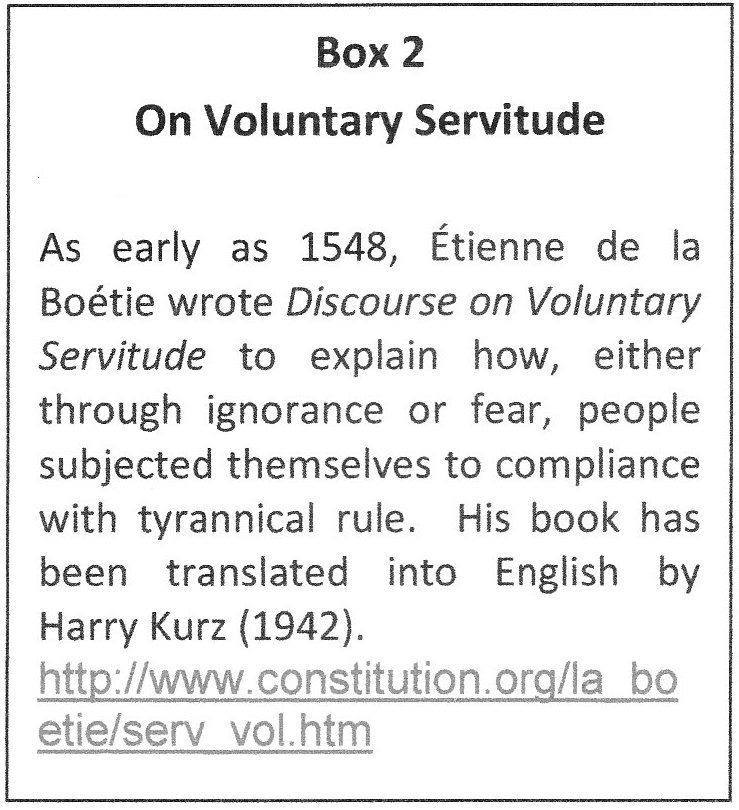 Step 3  To minimise the costs of enforcing their culture of greed, the aristocracy co-opted people into acquiescing in the violence that was inflicted on them. They achieved this by (inter alia) fabricating the ideology of patriotism. Thus, social outcasts were persuaded to join the army and kill others for patriotic reasons – in defence of the territory in which they no longer had a stake. Nationalism was shaped as a tool for camouflaging the private interests of the land grabbers. The outcasts were hoodwinked into acting against their best interests (see Box 2).

The culture of genocide mutated logically out of the convergence of rent-seeking and nationalism.

Step 4  Rent-seeking is insatiable. Those who live off the rents created by other people’s labours are locked into the boundless pursuit of idleness and luxury. So once they succeeded in dominating the home territory, and its laws (particularly as these applied to taxation) some European nations – the earliest were England, Portugal, Spain and Holland – turned their gaze seawards. The culture of greed mutated into colonialism. This entailed ethnic cleansing as an art of land grabbing. Indigenous peoples who would not vacate their home territories were violently “supplanted” by in-coming settlers.

Genocidal techniques were necessary for clearing the land (see Box 3).

Some scholars argue that colonialism was good for the peoples who were supplanted. British historian Hugh Thomas, for example, views the Spanish Empire as largely benign. Yet he estimates that the population of New Spain dropped from between 8m and 11m people in 1531 to about 2.5m people at the end of the century; and the indigenous people of Peru declined from 6m to 2m over the course of the three generations following the arrival of the Spanish land-grabbers (Thomas 2014). The death of folk cultures was associated with the deaths of the people. This was the culture of genocide in action. That some individuals who forged the Spanish Empire had good intentions is irrelevant to the outcomes.

Europe’s constitutional format – the matrix of values, laws and political structures – does not provide a neutral starting point for reconstructing a country like Bosnia and Herzegovina from the trauma of the 1990s. In exploring the future of the people of BiH, therefore, we need to locate the country’s quest for a clean slate beginning within the context of a general assessment of western culture in the 21st century.

Poverty in Europe and North America is a routine by-product of the economic system. At least one-third of the populations of most countries are social outcasts, in the sense that they have no material stake in their homeland territories. They subsist on welfare, dependant (like children) on the state. The Welfare State was devised to contain the discontent of the victims of the economics of apartheid. That system for managing social chaos is now being picked apart by governments under the doctrine of “austerity”. Meanwhile, poverty continues to kill people on an epic scale in materially rich nations. This is the prospect for BiH, if it accepts the so-called “reform” proposals advocated by the EU and agencies like the IMF.

No off-the-peg blueprint exists that can serve as a template for the former socialist countries. Therefore, people who wish to re-constitute their communities on principles that deliver peace and prosperity need to base their laws on first principles.

In assisting BiH to create a constitution based on justice, the European Union has the historic opportunity to redeem the crimes which some of its members inflicted on the rest of humanity. The EU needs to acknowledge that the culture of genocide has no part to play in the future of the continent. How may the European Commissioners in Brussels achieve this?

BiH consists of a population that is diverse in ethnic and religious terms. But they need to share a single ecological and economic space. The principle that would unify, in practical terms, a multi-cultural population is this: the land must be deemed to be a common heritage; the endowments of nature and society must be respected as accessible to everyone, equally.

The EU can help BiH to implement a financial system that is grounded in principles that are endorsed in the classical texts as both scientifically and morally sound. The heart of a fair and efficient market economy is the pricing mechanism that socialises the rents of land, and privatises people’s earned incomes.

The bonus that would flow from this project would be a new lease of life for the original EU mission: to abolish military conflicts across the continent. The decimation of people’s lives and livelihoods since 2008, most starkly for those living on the southern periphery, is a savage indictment of the EU’s current socio-economic paradigm. By facilitating the transition to a new social model for the people of BiH, the EU would also learn how to rebuild the trust of the many millions of people who, in the elections of May 2014, registered their determination to break-up the EU.

We must accept that the EU’s statesmen, and their commissioners, do not consciously intend to impose a genocidal culture on the people of BiH. But this would be the outcome of the policies that are advocated by Brussels. Those policies were paraded by the EU and IMF at a conference in Sarajevo on May 26-27, 2014, called Forum for Prosperity and Jobs in Bosnia and Herzegovina. We see the results of those policies throughout Europe today: with half of young people jobless in countries like Greece and Spain, and the savage reduction in living standards in countries like the UK and France.

The remorseless effect of EU policies is to further erode social solidarity. And yet, it is that spirit of cooperation which BiH desperately needs, if it is to succeed in harmonising the interests of its multi-cultural population. If the EU agreed to assist BiH to adopt the justice-based financial and fiscal policy, Europe would redeem itself for past misdeeds in the most poignant way possible. By this one policy initiative, it would announce to the world that genocide will never again terrorise the people of Europe.