I’ve mentioned that the Progressive Era from the 1890s depression through to 1920 was underpinned by Georgist ideas, especially in the USA and Australia, although the British attempt to introduce a land tax in the People’s Budget of 1909 also fitted the progressive criterion.

I thank Paul Egan and Philip Soos for providing these two charts showing Australia’s revenue collection from the federal land tax.  Note how the land tax yielded to the interests of property speculators in the early to mid-1920s.*  We may thank Bob Menzies for abolishing the capture of federal land revenue from the mid-1950s.

(* Yes! Real estate speculation became rife in Australia in the 1920s.  It was matched and overtaken by sharemarket speculation in the latter part of the 1920s about which we always hear much more.  The 1920s real estate bubble was written out of this part of our economic history, just as surely as the 1973 real estate peak has been neglected in the demise of the Whitlam government in Australia.  It was only the Khemlani affair, the OPEC crisis, or reckless spending that played parts in Whitlam’s downfall.  The bursting of the property bubble which left many Australians financially distressed or destitute from 1974 apparently did not matter.)  [!] 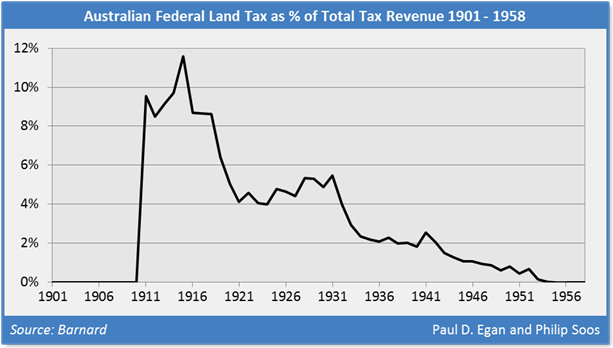 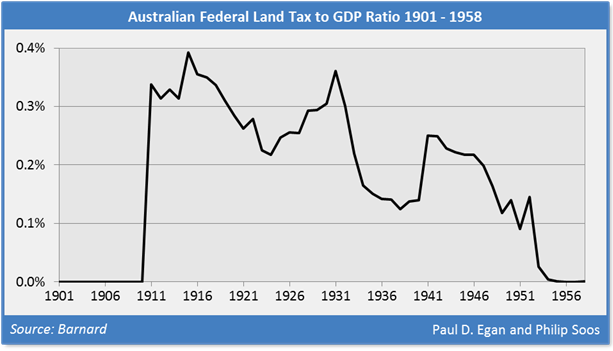 And …… congrats, Oz! “Highest household debt in the world!”

I knew we could once again lead the world in something.  🙁