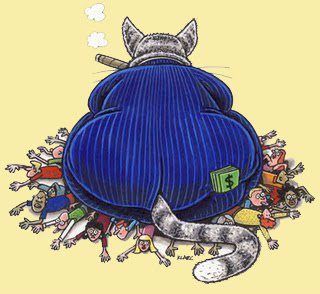 THE STORY SO FAR

OK, so now we’re at the stage where Ford’s knicking off out of Australia and General Motors is telling Holden workers they cost too much. Textile’s gone overseas and our once efficient ship-building industry was closed down years ago.

You might say manufacturing has had it. We try to recover the situation by claiming we’ve become a “post-industrial” society.  Yeah, sure!

We have all these effete economists who can talk the leg off a chair now having us convinced we need to extend the GST, rather than look to economic rents and monopolistic privilege for our necessary revenue.

Australians have become a witless lot; we stupidly accept the taxing of labour and capital rather than deriving necessary revenues from land and resource rents and natural monopolies as once we used to do.

You see, if you tax labour and capital the taxes are passed on in every stage of the production process, adding themselves and their deadweight to the prices of our products, nobody wants them.  Why would they?

It’s NOT a matter of excessive labour costs: it’s taxation and all its deadweight cascading throughout the Australia economy.

When are we going to realise the one thing most economists DO get right (but then weakly retreat from): that revenues from economic rents CAN’T be passed on in prices?

That’s the way to get back into manufacturing and to have our goods and services priced competitively.  However, I doubt Australians are up for it these days–we’ve become a little thick-witted–so down the gurgler we continue to disappear.

EVIDENCE ON HOW ECONOMIC RENT BEHAVES

Municipal rates and land tax are notionally already in the gross rent paid by a tenant, and can’t be ‘passed on’ again to the tenant:

If, as claimed by vested interests, the land value tax can be passed on, why do not these representatives of special privilege pass the measure and allow their friends to pass it on?  The reason is they know that the land values tax cannot be transferred. – EJ Craigie, former South Australian politician, circa 1958.

1 Though the landlord is in all cases the real contributor, the tax is commonly advanced by the tenants, to whom the landlord is obliged to allow it in payment of the rent. – Adam Smith “Wealth of Nations” Book 5, Ch 2

2 A tax on rent falls wholly on the landlord.  There are no means by which he can shift the burden upon anyone else… A tax on rent, therefore, has no effect other than the obvious one. It merely takes so much from the landlord and transfers it to the State. – John Stuart Mill (1806-1873) “Principles of Political Economy”  Book 5, Ch 3, Sect 2

3 The power of transferring a tax from the person who actually pays it to some other person varies with the object taxed.  A tax on rents cannot be transferred.  A tax on commodities is always transferred to the consumer. –   Professor James E Thorold Rogers “Political Economy” 2nd ed Ch 21, p 285

4 A tax levied in proportion to the rent of land, and varying with every variation of rents… will fall wholly on the landlords. – Walker’s “Political Economy”, p 413

5 The incidence of the ground tax, in other words, is on the landlord.  He has no means of shifting it; for, if the tax were to be suddenly abolished, he would nevertheless be able to extort the same rent, since the ground rent is fixed solely by the demand of the occupiers.  The tax simply diminishes his profits. – ERA Seligman “Incidence of Taxation” pp 244-245

6 A tax on rent would affect rent only: it would fall only on landlords and could not be shifted. The landlord could not raise the rent, because he would have unaltered the difference between the produce obtained from the least productive land in cultivation and that obtained from land of every other quality. – David Ricardo “Principles of Political Economy and Taxation” Ch 10, Sect 62

7 The way taxes raise prices is by increasing the cost of production and checking supply.  But land is not a thing of human production, and taxes upon rent cannot check supply.  Therefore, though a tax upon rent compels owners to pay more, it gives them no power to obtain more for the use of their land, as it in no way tends to reduce the supply of land.  On the contrary, by compelling those who hold land for speculation to sell or let for what they can get, a tax on land values tends to increase the competition between owners, and thus to reduce the price of land. – Henry George Progress and Poverty, Book 8, Ch 3

1 Pure land rent is in the nature of a “surplus” which can be taxed without affecting production incentives. – Paul A Samuelson, Hancock & Wallace, “Economics – An Introductory Analysis” (Australian Edition) Ch 28 p 595

2 …. the complete inelasticity of the supply of land means that a tax on land rent has no effect on price or output and therefore does not alter resource allocation…This outcome is in contrast to property taxes on buildings.. Jackson & McConnell, “Economics” (2nd Aust Ed pp 540/541)

3 The (land) tax cannot be passed on to consumers… The failure of the single tax idea does not change the fact that a large increment of value does accrue to the owners of land, particularly in or near urban areas, due to the growth of the economy, without the landlord having to contribute any productive factor services in order to earn it. – Richard G Lipsey, “An Introduction to Positive Economics” (3rd ed.)

4 Aside from its compelling appeal to the public’s sense of justice, a single tax on land has another advantage over most other forms of taxation – it is neutral in its effects on production incentives and resource allocation. – Waud, Hocking, Maxwell & Bonnici, “Economics” (Australian Edition)

C.   SO, FOR THE SAKE OF EFFICIENCY AND GREATER HOUSING AFFORDABILITY, WHY NOT PUT MORE REVENUE WHERE IT ULTIMATELY FALLS ANYWAY?

It is in vain in a country whose great fund is land to hope to lay the publick charge of the Government on anything else; there at last it will terminate. The merchant (do what you can) will not bear it, the labourer cannot, and therefore the landholder must: and whether he were best to do it by laying it directly where it will at last settle, or by letting it come to him by the sinking of his rents, … let him consider.”  — John Locke, “Some Considerations of the Lowering of Interest” (1691).

I have not lost any of the principles of public economy you once knew me possessed of; but to get the bad customs of a country changed, and new ones, though better, introduced, it is necessary first to remove the prejudices of the people, enlighten their ignorance, and convince them that their interest will be promoted by the proposed changes; and this is not the work of a day.  Our legislators are all landholders; and they are not yet persuaded that all taxes are finally paid by the Land. — Benjamin Franklin, Letter to Alexander Small, (September 28, 1787). 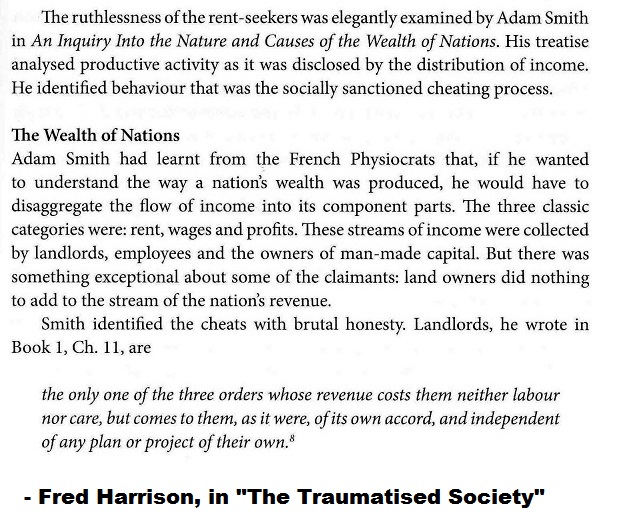 One thought on “THE COLLAPSE CONTINUES ….”