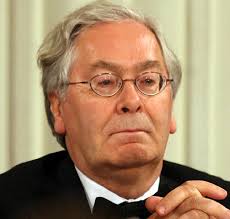 And there he was tonight, Lord (Mervyn) King, former Governor of the Bank of England (2003 – 2013) being interviewed large as life by Stephen Sackur, on the BBC’s “HARDtalk”.

What did he learn from the world financial collapse? Well, he thinks banks will have to take out higher levels of insurance for higher risk loans, separating retail banking from business banking.

Huh? Will retail banking still lend into residential bubbles though, Lord King? Ask him that one, Stephen ……. Stephen!

Britain votes whether she will remain a member of the European Union in June; what does Lord King think? Economic logic points to the fact that the EU should not exist, but political will is ensuring it will continue, he said.

But then, having actually given an opinion, the former Governor thought he’d better back off. “Half the people believe it’s obvious we should stay in, and half think we should leave. David Cameron and George Osborne think it a mistake to leave the EU. Those who want to leave believe Britain will become a land of milk and honey, and if we stay it will be a matter of locusts and plagues. We need to hear the arguments from both sides, proper debate”, he sort of opined.

But won’t it still be 50/50, Mervyn? You started off with an opinion, man! This is hard talk? C’mon Stephen, mate, I’ve heard you give people a much tougher time than this “safety belt” crap he’s dishing out to you! I’m not buying Mervyn’s book, and won’t be diminished one iota!

But there it was. That was it. Mervyn the fence-sitter. The central banker who presided over UK banks lending too much into bubble-inflated land prices and didn’t notice – so he was made Baron of Lothbury for his public service, for not rocking the boat.

Look sideways, let things happen, cover your arse – and get a gong. That’s central banking for you!