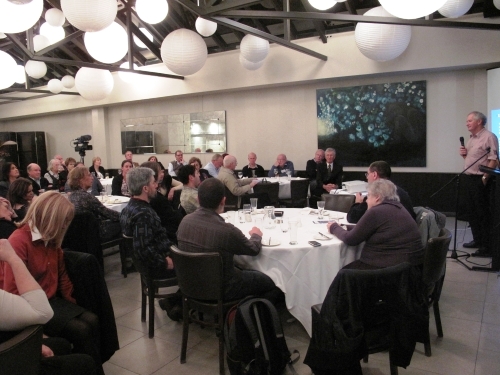 “The 120th!” mused Prosper Australia’s President, Lloyd Churches, in introducing Leo.  “Do you realise that means the first annual dinner was in 1891, the year after Henry George visited Australia?  He actually addressed thousands of people at the Exhibition Building in 1890, just across the other side of the road from where we’re gathered tonight?”

Well, we weren’t there in thousands tonight, but in an urbane, encouraging and thoughtful speech, Leo Foley urged Georgists to consider returning moral compass to an electorate grown tired and cynical of the foundering political process.

We should consider standing for office to explain how taxes and the increasing privatisation of our natural resource rents had placed the world in the situation it finds itself at this critical point in history.

We need to show people how the value of government is actually embedded in our land values, Foley observed.

He announced he is throwing his own hat in the ring to stand as a candidate for the October municipal elections in the City of Hobart.

The Georgist road in politics is not an easy one, but we do have people with deep knowledge of economics and the ability to counter the electorate’s confusion of land with “private property”.

He suggested the word “stewardship” should loom larger in the Georgist approach, as a counter to the problematic term “ownership”.

In delivering the vote of thanks to Leo on behalf of an appreciative audience, I agreed if we are to progress the movement we do indeed need to choose our words and actions carefully, and that he was onto something with “stewardship” as relating to our tenure of land.

On further reflection this morning, as stewards also of the ideas of Henry George, it does seem to be time for Georgists to step into the political arena.