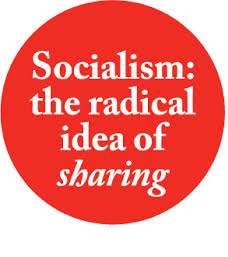 Donald Trump is the encapsulation, a cartoon, or caricature, of the US having fallen out of love with its party political system. However, without real economic solutions, President Trump will prove to be a matter of ‘out of the frying pan and into the fire’.

The Democrats couldn’t quite bring themselves to turn to Bernie Sanders as their presidential candidate, though—because he’s a socialist—and in ‘the land of the free and the home of the brave’ any form of socialism is seen as a curse. And Bernie was saying all the typical things socialists say, except what he really needed to say.

US capitalism has not evolved from the sort of imperialism that seeks to capture other nations’ natural resources (viz, Middle East oil) by still seeking to install friendly governments, so isn’t it beyond time that it did so? Is it not also time for the US and capitalism to recognize that nations have a right to their own natural resources?

This can be done quite simply, by properly recognizing the mechanism that US capitalism uses, both to dispossess overseas nationals and the poor and middle class within the USA itself.

Yes, the very mechanism that capitalism now employs to impoverish and dispossess people further from their land and natural resources. Where this has been attempted to be rectified, such as in Chile, Venezuela, Iraq, Libya, Iran, Syria, that’s where government must be undermined, or the country invaded, because their resources must be made ‘free’ for capitalist companies to ‘own’.

The economic rent of natural resources is the only thing that needs to be socialized.

For the sake of justice, and to put an end to economic imperialism, the USA must come to acknowledge the need for the public capture of economic rent. It would also bring banking, rent-seeking private companies and tax havens to heel.  That capitalism has now morphed completely into the creation of money for rent-seekers needs to be addressed and remedied urgently. Not to do so will certainly send increasingly crippled economies further into Donald Trump’s swamp.

It would be nice if longstanding and effective socialist critics of the ills of capitalism—such as Noam Chomsky, and Chris Hedges, et al—were to focus on the one thing that does need to be socialized. Michael Hudson has done so, and Max Keiser has been open-minded enough to acknowledge the point by appreciating Hudson’s approach, and having other anti-rent-seeking folk on his program, The Keiser Report.

We need to capture the economic rent of our natural resources in order finally to put paid to this incredibly counter-productive period of economic retrogression.