IT TAKES A CERTAIN TYPE OF MENTALITY, DOESN’T IT?

A number of other social pathologies develop once you come to believe that land may be ‘owned’ instead of held for exclusive possession upon payment of its economic rent to the public purse.

First of all, if the full rent of a piece of land is not captured publicly, that part permitted to be privatised becomes capitalised into a land price. This tends to increase over time and has the effect of denying access to those who can’t afford the payment.

The response of the mentality that can’t see anything wrong with increasing land prices is usually “Stiff!”, it not being accepted that those on the planet are born with a right to access. “Whaat! A right!” Yes, a right.

“Wait a minute, they can borrow, like we all had to!”

Yes they can.  And therein arises another problem.  Before society came to permit private ‘ownership’ to subvert this most basic human right–now even Christian churches manage to skirt around the biblical injunction that land must be rented, not ‘owned’ (Leviticus 25:23)–the churches used to preach against usury and interest. Once they fell, hook, line and sinker for the commoditisation of land–that land may be purchased in perpetuity for a capital sum–they could no longer continue to preach against interest and bank usury, so it seems both are OK now.

“Oh, but morality can change!”

The result in this case? Just as land prices would reduce towards zero with the capture of the rent of sites, so also would interest rates.

However, increasing land prices permit interest to develop into usury. Those who might claim that the charging of interest on bank mortgages does not equate to usury may contemplate whether the combination of land price, pathological in itself, with interest charged thereupon for thirty years, constitutes an even greater societal ill.

Next: once land price denies some people of their basic right to land, it is left to private landlords to provide their accommodation at a private rental that includes the land rent owed to the community, plus the landlord’s return on the dwelling.

“But this is a public good!” Oh? A public bad, surely? Especially when the alternative is for government to capture the publicy-generated site rent instead of delivering the greater part of this economic rent to banks and the 0.1%?

Society having foregone its most fundamental moral responsibility to capture publicly-created land rent, it then becomes necessary to tax private productivity, industry and thrift. This is a form of theft, the fundamental cause of inflation, and adds to prices and unemployment.  It’s arguable that unemployment and prices of goods and services would at least halve under a rent-capture regime.

Worst of all, a mindset that blissfully denies access to sites upon payment of the site rent–as, for instance, was required in the early years of the city of Canberra–will find it a short step to deny other rights.

Economic depression is born of this mindset, and it is not too sweeping to say wars also.

As have many other moral philosophers, the social philosopher Herbert Spencer made the claim in Social Statics that land can never be treated as private property – but he recanted once he established himself in society and began to rub shoulders with the lords of the land.

Those who wish to study how this mentality came to be achieved by Herbert Spencer might read Henry George’s A Perplexed Philosopher which includes Spencer’s Social Statics chapters “The Right to Land” and “The Right of Property”. 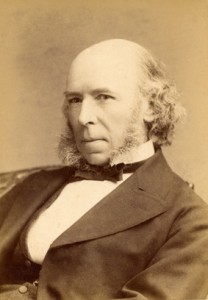