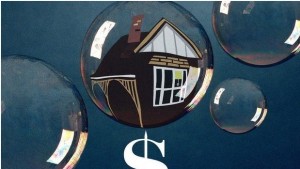 The housing bubble and the pin factor

Some economists and analysts have been saying for a decade or more that we are going to have a major slump in housing prices, and they have, according to real estate commentators and others, been proved wrong. But maybe the doomsayers have not been “proved wrong”. Rather, the predictions were a bit premature and/or we have already had a bit of a correction in 2008-09 with the global financial crisis, postponing the inevitable bursting of the housing bubble for a while longer.

Of course, before a bubble can burst, you must first of all have a bubble. A book just out called, Bubble Economics: Australian Land Speculation 1830 – 2013, by Paul D. Egan and Philip Soos, argues precisely this: there is a bubble and all the evidence points to it being about to burst.

Sobering stuff. Pitted against this is the view that Australian governments will continue to import more and more people into a finite residential land envelope, so continued increased demand will mean ever-rising housing prices. Egan and Soos examine earlier housing bubbles in Australia: the 1830s, 1880, 1920s, mid-1970s and late 1980s. Then they add a hard-headed analysis of the present housing market.

You need more than just rising prices to create a bubble, whether in housing, internet stocks or, indeed, tulips. You also need increasing private debt and a falling yield (as surging housing prices far outstrip comparable rents). To get a bubble these things have to rise quite quickly – at a rate faster than the rest of the economy to a point where the low yield rate and/or high indebtedness forces people to leave the market quickly, causing collapse.

The statistics they present are quite forceful. Between the low in 1996 and apparent peak in 2010, real housing prices soared by 123 per cent (more than doubling) and they are getting back to 2010 levels now. Total land values relative to GDP doubled between 1996 and 2010, driven by rising residential land values. In the meantime, yields in the form of rent have fallen to just 1.9 per cent. The price-to-earnings ratio has blown out to 53. That means a $1 million house is returning just $19,000 a year, compared to $40,000 from the poorest fixed-interest deposit.

It means you need an awful lot of capital gain to make the housing investment worthwhile. There clearly comes a point at which the returns are too low and the expectation of capital gains too unrealistically high, so that people desert housing, or banks refuse to lend or demand their existing borrowers reduce their debt.

The only questions are how soon will that happen, and when it happens will it be sudden and large or gradual and incremental?

Egan and Soos argue that it will be soon, sudden and large, and point to the historical experiences, noting Mark Twain’s point that while history does not repeat itself, it does at least rhyme. Indeed, they point out the Australian housing bubble is bigger now than those in the 1920s, mid-1970s and late 1980s.

The present housing price-to-earnings ratio of 53 is interesting. The dot-com bubble in the US burst before the ratio got to 53 – it reached 47.2 at its peak. In that market, people expected dot-com stocks to always increase in price, just like Australian housing investors expect lots of capital gains, so they paid more for the assets than their returns suggested they were worth, until reality set in.

An interesting aspect to Egan and Soos’ work is that they take account of the owner-occupier part of the market. The yield for those dwellings is saved rent. There comes a point at which a person says it is better to rent than buy. You can borrow $1 million worth of capital in the form of a house for rent of just 1.9 per cent of its value. Pretty good deal.

We are seeing that with historic lows in first-home buyers and in lower rates of owner occupation. This can contribute to price collapse. The hidden pin in the bubble-bursting exercise is debt.

“Deregulation, privatisation and liberalisation since the end of social democracy in the 1970s has allowed the financial sector to lend freely,” Egan and Soos write. “The dire consequence has been the rise in the unconsolidated household debt to GDP ratio from 46 to a record 111 per cent between 1993 and 2010, lifting residential land prices far beyond economic fundamentals.”

They predict that high population growth and fixing the huge level of private indebtedness will probably cause a large decline in per-person income and production. They attack the standard explanations for ever increasing house prices, such as a housing shortage, high population growth, demographic change, falling nominal interest rates, a low rate of inflation, regulated land supply and foreign-investment controls. Rather, they argue, the real causes are debt-financed speculation and a taxation system that rewards speculators – a classic unsustainable bubble.

Their warning is grim: “Real housing prices may fall 30 to 50 per cent across the capital cities, devastating the economy and rendering Australia’s financial sector insolvent.”

One might well argue that negative gearing and political aversion to allowing housing prices to collapse will mean that there will be no bursting bubble. Also, the prospect of capital gains tax tends to make sellers delay sale until they get a favourable year for themselves with either capital losses to offset or a general low-income year.

Further, stamp duty; the time-consuming conveyancing process; and the requirement to sell the whole asset means that housing markets are not as susceptible to sudden collapses in the way sharemarkets are. But all that said, there comes a time when prices rise so high that these factors lose their force and the rational desire to make a reasonable return leads to the inevitable re-entry of economic forces.

It would be better for Australia if there were no bursting bubble but rather a gradual levelling out of housing markets.

To that end the government and the big lenders might well look at policies that favour productive rather than speculative borrowing.

Australia’s public debt is low, yet the government gets in a frenzy about it. Whereas our private debt is among the highest in the world, yet our government financiers just add fuel to the fire.