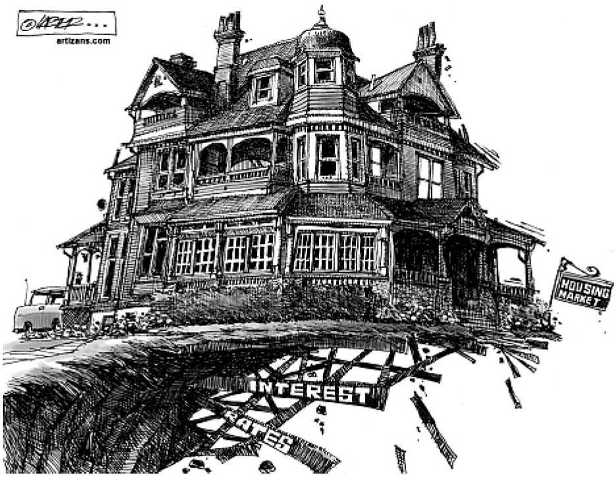 WANT TO OPT OUT OF INCOME TAX AND THE GST?

Right about now Treasury and the RBA’s greatest concern should be whether the Australian property market is about to drop off a cliff.

What can they do in this circumstance? If they do nothing, many property owners will find themselves in negative equity. If the June quarter’s National Accounts show negative growth in September, we’ll be in technical recession.

Many Australians have a feeling, or dread, that something big’s afoot; they’ve virtually stopped shopping, because they’re busily paying down Australia’s record household debt.

So, it’s not at all fanciful to conclude that we’re almost certainly facing a recession, and that the relatively low unemployment rate will shortly start to spike.

I’ve already assessed elsewhere that we’d spent $2.8 trillion on real estate during the term of the current bubble to 2010, and that some $805 billion of that amount is actually within the bubble itself.

So, Treasury, the RBA and Australian government are going to have to tread very warily, if our ‘big four’ banks are to remain solvent.

Although I see greater public capture of natural resource rents, including land, is the only medium to long term response, I’ll readily confess to not having much of an idea about how we deal with the obvious short term economic shock that is ahead of us.

Enter Dr Gavin Putland, director of the Land Values Research Group, who has been busy working on this problem for some time.  Having assured himself that it works, he blogged his response earlier today.

Property owners should be given the right to opt out of the income and GST system says Putland.  His proposal for a “no losers” system does prevent home owners from plummeting into negative equity – except the “bailout” element is financed not by taxpayers, but from the saving in deadweight costs!

Hey! Julia, Wayne, Treasury, RBA, are you listening?  Something that works is surely something worth considering, especially if it obviates a US style crash in property values and has no losers?

Putland suggests the only possible opposition to the tax exemptions rent (TER) can come from opponents of choice – and he’s right.