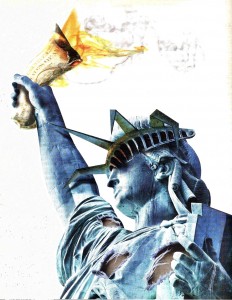 And so it continues: the Left not knowing how taxes to which they’ve attached themselves like Ahab to Moby Dick have created this financial collapse; the Right believing that if any government revenue at all is necessary, it must only be used to fight ‘wars of liberation’ in foreign countries. Neither these, nor anything else, the latter say, should be funded from publicly-generated land values.

Modern political discussion has become hopelessly enmeshed in this great and unnecessary divide between aspirations for personal freedom and those who believe there is a necessary role for government.

It should be obvious that society can tolerate neither rampant personal freedoms which impinge on the freedoms of others and on good order, nor dictatorial governments propounding never-ending cases for hostility and war. But it’s obviously not obvious.

Though the American philosopher Henry George showed there’s a middle ground between these polar opposites, we divide ourselves more than ever by the pointless bifurcation.

The 0.1% is quite happy with this arrangement.  Under the cloak of such ignorance it will continue to divide, rule and prosper at society’s expense.

Proponents of liberty would do well to consider whether any freedom can be possible when a knot in our distributional system clearly favours less than 0.1% of the population.

Similarly, those who acknowledge there is indeed a role for government should understand that it must not be funded—or stolen—from the earned incomes of labour or capital.

Once it’s understood that the unearned income from land—known by economists as rent— is sufficient to replace taxation at all levels of government, the means of reconciling both freedom and a necessary level of government for the harmonious running of society should become apparent to all.

Unfortunately, however, too few realise there is this middle ground.

In such an educational void, economic depression and the ensuing social upheaval must continue to settle across the globe as a permanent feature.

“THERE come moments in our lives that summon all our powers — when we feel that, casting away illusions, we must decide and act with our utmost intelligence and energy. So in the lives of peoples come periods specially calling for earnestness and intelligence.
We seem to have entered one of these periods. Over and again have nations and civilizations been confronted with problems which, like the riddle of the Sphinx, not to answer was to be destroyed; but never before have problems so vast and intricate been presented. This is not strange. That the closing years of this century must bring up momentous social questions follows from the material and intellectual progress that has marked its course.”