Although no political party other than the Australian Democrats and the Republican Party of Australia promote capture of publicly-generated land rent in their policies by way of land tax (the Australian Labor Party having written, but never voted, it out of the party platform), fortunately the major parties still seem to accept the need for an ad-valorem charge on real estate at local and state government levels.

The extreme right is quite different, however.  It doesn’t accept the principle that land and resource rents are owed, equally, back to all the nation’s inhabitants.  Ayn Rand is their god, and in their eyes economic rent belongs to individuals. ‘Royal libertarians’ still seem to be in Rand’s thrall.

And thus it has been that a healthy suspicion of government has been replaced by a mindless call of the right to privatise all those natural monopolies once understood should necessarily be controlled by government.

In the state of Victoria we’ve seen the supply of gas and electricity privatised, the metropolitan rail network privatised, and our freeways turned into private tollroads – the latter reversing the age-old English dictum of the freedom of the highways and byways.

Ironically, the hard economic times brought about by the failure to capture Victoria’s rents in the late 1980s boom made the public asset sell-off all the easier in the recession of the early 1990s. The legislation was able to be passed by the forces of the extreme right on the proposition Victorians had no real entitlement to retain these natural monopolies when they were so eminently saleable in the recession. (They were obviously undersold in the recession.)

In a tribute to this Ayn Randian neo-liberalism, Victoria has now had more of its public infrastructure sold off to big private rent-seekers than any other state – and we’re beginning to witness the devastating effects.

As with the privatisation of Australia’s privately-constructed once publicly-owned telephone network, there is little doubt these state privatisations are not working: under the questionable guise the ‘user pays (twice)’, they’re coming at far too great a cost to the public.

It’s almost certain Melbourne’s trains would be running supremely better under public ownership than the procession of private companies which have endeavoured to run them; that tollways have been responsible for poorer people being unable to use their major highways to the extent they’d like to be able to; that the supply and maintenance of gas and electricity are not up to the standard when these utilities were in the hands of the public.

Properly engineered embankments would certainly not have provided the outrageous sight of the Morwell River recently disappearing into Tru Energy’s brown coal mine.  [Want an ironic laugh?]

Whilst the Victorian Labor opposition is quite correct in calling for an inquiry into the incident, and federal Democratic Labor Party Senator John Madigan is to be commended for bringing the matter up in the Senate on Tuesday night—and warning New South Wales and Queensland governments against going down the same path as Victoria in selling off their electricity generators—the real hope of the side for Victoria is to reverse these privatisations at such extreme breaches of care, and otherwise as the opportunity arises. 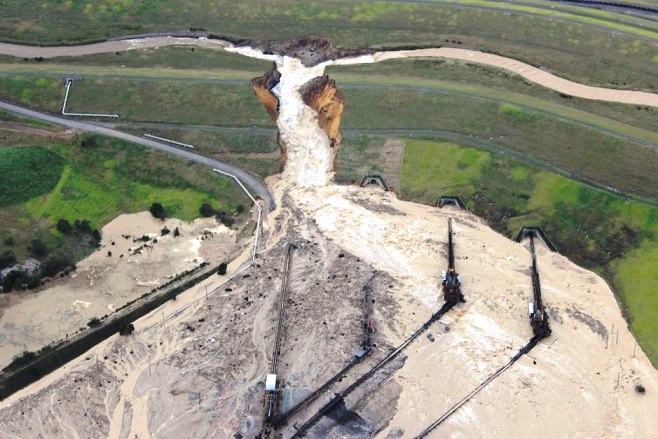 9 thoughts on “RECOVER SOVEREIGNTY OVER OUR NATURAL ASSETS”