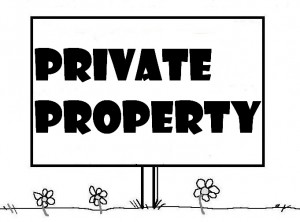 I’ve put these notes together based on my talk with Sharon Firebrace on her “Razor’s Edge” program this morning:

You’ll often see signs on land, “PRIVATE PROPERTY”.  They’re all wrong.  It’s simply land to which they hold title and have exclusive possession. Their responsibility doesn’t stop with municipal rates.

Economists have a term, ‘economic rent’.  It’s the most important thing in economics, but economists themselves don’t understand its importance.

All the great philosophers have said you can’t own the air; nor can you own the water – or the land.

Even the Bible commands Jews and Christians “The land must be rented, not owned, because you are only passing through.” (That’s Leviticus 25:23)

Like the philosophers, the original native American and native Australian peoples understood that land is PUBLIC PROPERTY for common use.  So, the PRIVATE PROPERTY signs are wrong.

PRIVATE PROPERTY is you, yourself.  What you make and what you earn. You have a right to yourself, and the government has NO right to you or YOUR income, providing you’re not doing harm to others.

When the Pilgrim fathers hit the shores of North America, they selected their sites but, for the privilege of having them, they had to pay the land rent as community revenue. That was PUBLIC property.  (Wm. Bradford, 1627,  History of Plymouth Plantation)

Let me quote Philadelphia’s first tax law on 30 January 1693:  “Put to the vote: as many are of the opinion that a public tax upon the land ought to be raised to defray the public charge, say ‘yea’. “Yea! “Carried in the affirmative, none dissenting.”

In the feudal times between the 9th to the 15th century, the land rent was paid up the social ladder to the King for public works and to maintain his army.

Even later under freehold title in British Law, the landholder was still expected to pay what was called “the quit-rent”, but we’ve permitted our system to morph into the same form of landholding that destroyed Ancients Greece and Rome, where they commoditised land, buying and selling it for a profit, without having to pay its economic rent into the public purse.

This transformation means we’re shackled with the worst of both worlds: taxed on our EARNED INCOMES and on our comings and goings AND paying high land prices.  Seventy per cent of Australian mortgages are land prices.  If we captured the economic rent of the land, land prices would be far less and we’d have more disposable income.

Just this morning I received some phenomenal preliminary work from a young researcher at Deakin University, Philp Soos, indicative that the net position of Australia’s super wealthy–the increase in their land values minus what they’ve paid in taxation–is running at a surplus in their favour of billions of dollars.  Renters and the poor can’t offset their taxes by the uplift in their property values in this way.  Is this fair?

People have failed to see the capture of most of the economic rent of our land and natural resources by the super-wealthy is why world economies are grinding to a halt.  There’s a vast wealth divide where the 99.9% have too much debt–which now equates to inadequate demand–whilst the 0.1% steal far too much of our publicly-generated economic rent.  Greed has won the day and banks, leading the way, still expect to be bailed out.

Of course, Gina Rinehart is not paying anything like the full economic rent for her iron ore leases, either. We’re being dudded and Australian society pays the penalty.

We’re currently witnessing the financial collapse of the US and Europe as they pay the price for not having captured the economic rent of their resources instead of taxes.  Australia will follow. That’s because people and their governments have failed to distinguish economic rent as PUBLIC PROPERTY and our earned incomes as PRIVATE PROPERTY.

One thought on “RAZOR’S EDGE”