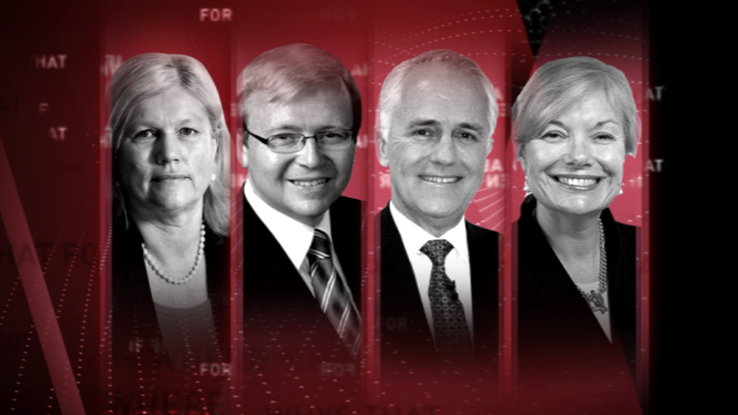 There were a number of wry jokes about deposed party leaders Rudd and Turnbull having greater popularity than current leaders Julia Gillard and Tony Abbott, of course.

“You’re both popular and liberal-minded; why not join together and form your own party?” (or something to this effect) inquired one audience member.

Mention was made that the MRRT designed by Julia Gillard and selected big miners yields literally nothing in comparison to Kevin Rudd’s proposed RSPT. (Surprise, surprise!)

Greater productivity was the one thing that’s going to save us, they all agreed.

The show transitioned from tax reform onto IR – almost as though tax reform hasn’t anything to do with industrial relations.

Don’t both labour AND capital have a great common interest in getting rid of all the taxes that Ken Henry’s panel of inquiry showed were inefficient, and in clawing back some of their earnings, by making the switch towards land and natural resource-based revenues?

“Flexibility will get people into work”, opined Turnbull, hinting at a swing back in the direction of WorkChoices (because Labor’s swung the pendulum back too far in favour of the unions again Ridout, Sloan and Turnbull all agreed).

“It’s not just labour’s productivity” (on which we need to concentrate) countered Rudd.

You’re quite correct, Kevin. And as Malcolm’s wife, Lucy, has spoken publicly in favour of the positive affects land value taxation has on development and productivity, I think you may be biting your lip on this point, Malcolm, because you don’t want to ‘scare the horses’ before a federal election.

That’s because there’s a great educational void about resource-based revenues as an alternative to taxes on labour and capital, isn’t there?

But why not take the lead and help educate people to the point, Malcolm? You do have real leadership, statesman potential in you? Winston Churchill did.  David Lloyd George did. On this very point.

“We’ve got to use taxpayers’ dollars efficiently” expounded Malcolm, now invoking statements in favour of motherhood.

Yes, but it’s from whence you draw your revenues that’s key to the world’s current problems, Malcolm.

Learn from Lucy, Malcolm. Stand up and be counted.