We’ve graduated from tiresome trivialities such as manufacturing, because we’re now oriented towards tertiary industry. We’ve machinery and appliances to assist us and have become too smart to be involved in physical work.  So, as the education and knowledge we’ve acquired represents power, Australia can properly be said to have become a post-industrial power.  [Hmmm …]

Oh, certainly, some primary and secondary industry still persists but, with the exception of mining, it’s really nothing to speak of. That which remains is just an aberration, the appendix of an era that has fortunately passed us by.

So, apart from mining, Australia is these days mainly about education, finance, insurance, real estate, restaurants and entertainment. Oh, and analytical commentary by a multiplicity of experts, which in itself constitutes a substantial tertiary industry.

You’ll observe that the Chinese are much less progressed. Therefore, they still have many years ahead of them in manufacturing before they can hope to become post-industrial like us.

How did we do it? How were America and Australia able to make this near-magical transition from manufacturing wealth, to leaving other countries tossed about in the wake of our service sector?

It wasn’t easy. We were astonishingly clever.

Both in Australia and America, taxation scholars noted that in the early days, we didn’t have a tax on our incomes. The US introduced income tax as a WWI measure, and Australia only introduced it federally during WWII.

That was because in the early years of both countries we’d set our sights on manufacturing. I mean, you don’t levy an income tax if you want to be tops at producing things, do you?

In those days, apart from excises, taxes on land were commonly used to raise revenue. Philadelphia’s first tax law was, in fact, passed unanimously on 30 January 1693 as follows:-

“Put to the vote: as many are of the opinion that a public tax upon the land ought to be raised to defray the public charge, say ‘yea’.” ….
“Carried in the affirmative, none dissenting.”

So, after WWs I and II respectively, US and Australian tax scholars and politicians began to think we really ought to keep a lid on manufactures by retaining these new income taxes. Conversely, we should start to get taxes off land if we wished to extend and to foster the real estate industry and banking, and other such tertiary industry.

Their thinking was inspired!

And so it was that taxes on land began to be wound back as we sought to promote property investment, progressively relying on greater income taxes to curb the possibility of overproduction in the manufacturing sector.

In Australia, Prime Minister Menzies removed the federal land tax in 1953, and, at the outset of the ’70s, Gough Whitlam decided to fund half of local government – which had formerly funded itself from property rates – out of the federal income tax.

We were well down the track to becoming post-industrial!

[Fast forward to the end of the first decade of the 21st century.]

So, here we are, Australia and America, along with other post industrial nations, having sent most of our industry offshore to China, to keep them making goods cheaply for us that we used to have to make for ourselves.

This allows us to direct our attention into using our often tertiary-educated brains to invest. We have the choice of investing in the share market, in real estate, on the gee gees, or on the pokies. And the super industry is able to invest our compulsory superannuation levy on any combination of all four! These are but some of the benefits of the tax system having liberated us from the daily grind of actually producing widgets. We are free to exercise the gifts our education has given to us in so many other areas.

We have been liberated and have so much leisure time on our hands, with few cares or concerns.  [On this score, has anybody noticed the tax regime has rendered our Productivity Commission redundant? Can’t they all just retire and go home now?]

And here we are on 24 July 2011. Aren’t things going just swimmingly in the post-industrial west? Is this not what the Indians call nirvana? 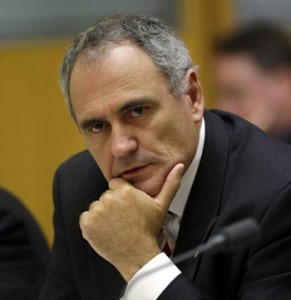 I can’t image who permitted Ken Henry’s ‘Australia’s Future Tax System’ panel to break into our reverie to suggest we ought to abolish most of our taxes on industry, and to institute a federal land tax and a mining rent.

That’s not post-industrial at all.