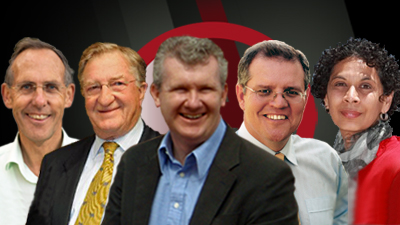 C’MON, GUYS, THERE IS AN ANSWER!

I was at a Prosper Australia committee meeting last Thursday night, so I missed entrepreneur Dick Smith’s “Population Puzzle” and the “Q and A” session that followed on ABC-1.  But I got to see a tape of them yesterday. Unfortunately, the fears I expressed in my previous blog were realised: Dick Smith’s Population Puzzle was disappointingly lightweight.

At least it posed a question worthy of debate in Q and A.

Tony Jones Q and A show, also attended by Dick Smith and a number of special invitees, was quite interesting; but it was extremely frustrating for anybody understanding anything about land and natural resource rents.  It featured:-

They were all pretty good, seeming to accept that there is a world population ceiling. But the debate rested upon whether we’re anything like being ‘there’ yet. Each made a combination of valid and less valid points, but none zeroed in on the equitable access to resources by employing natural resource rents and pollution charges for revenue, before we consider population controls.

The ‘resources are finite’ slogan played its usual role. (Why not capture their rent, then?)  However, the inference made is that they’re disappearing, rather than being converted in substance.  (What about the conservation of mass, Bob?)  So, by changing their form and then recycling our resources, it is indeed possible to have a chain of continued economic growth, notwithstanding many peoples’ view to the contrary.

Bob Brown correctly mentioned that the mining tax was fair before he proceeded to lose me by favourably invoking the Reverend Thomas Malthus.  “Malthus was wrong!” interrupted Elliott. (Of course he was.  We’re still here regardless of his gloomy predictions, but Dick Smith’s and Bob Brown’s neo-Malthusianism still garners incredibly strong support.)

Some of the participants came from a less gloomy point of view.  They may even have agreed with the American social philosopher, Henry George, who famously said: “It’s a well provisioned ship, this on which we sail through space”.

John Elliott was the surprise package.  He said we should tax people in the regions less.  Yes, John!  Take it a little further, though.  Wouldn’t a single rate land value ‘tax’ do this, because land values are higher in the cities and lower in the regions?

However, the point that those who monopolise and speculate in our land and natural resources are ripping us off eluded the Q & A panel. How was this?  Surely, it patently mocks us as world economies flounder and collapse as a result of taxation and resource speculation?  No?  People still in denial, maybe?  We clearly do need to capture more of our land and resource rents if we are to allocate natural resources more fairly and efficiently, before we seek to pull up the population ladder and cry “That’s enough!”

But we should do that quickly, because travelling in time from Joshue De Castro’s important 1955 “Geography of Hunger” through Colin Clark’s 1973 “The Myth of Over-Population” until today, there’s a welter of studies evidencing that when economies in underdeveloped countries start to improve, their birth rates also decline.  Meanwhile, national economies continue to crumble as a result of the ongoing privatisation and monopoly of land rent, a process that is pauperising so many once reasonably well-off people in the west.

It was so frustrating that Dick Smith and Tony Jones both failed to touch upon this most natural solution to so-called ‘overpopulation’!  No, we don’t have to wear hair shirts nor return to the middle ages, guys!