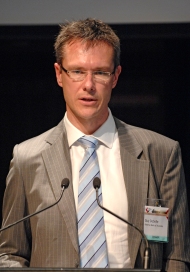 The Reserve Bank of Australia’s Guy Debelle announced today that he thought poor risk management was responsible for much of the financial crisis.  Oh, surprise!

Maybe Guy found a copy of THE AGE dated March 28 2008 in which I said the same thing?  The RBA is improving.  Guy is only 29 months behind the times.  I’m not being a smart arse here, I’m just completely pissed off at how the RBA continues to make apparently thoughtful statements after the event.  (And chancing your arm that we may be in for a double dip is hardly newsworthy now, Guy!  We’re in a depression, for God’s sake, matey!)

Why always post hoc and never a priori?  Aren’t you guys meant to be protecting us?  What’s the point of the RBA if it can only give an historical account of recent events?  You’re meant to be in there moderating things, folks, not standing back and thereby assisting to make them worse!

Where has the RBA been since land prices shot moonwards from 1999-2000?  In fact, I commented in the British journal Geophilos in 2001 that the then Governor of the Reserve Bank, Mr Macfarlane, had been making soothing statements to the effect that “asset price inflation of either shares or property had not become a problem”  as late as 10 July 2001.   So, when exactly does it become a problem, RBA?  Only after a crash, it seems!

And the RBA can’t get out from under, either, by seeking to lay the blame at the doorstep of the other banks, Guy.  You and APRA have a role of leadership and responsibility in all this.  I said so in the following letter which appeared in The Australian Financial Review on Monday 21 November 2005:-

Home truths for RBA and APRA

Phil Naylor, the chief executive of the Mortgage Industry Association of Australia, argues that mortgage brokers should not have to “take the rap” for the poor quality of home loans (“Don’t blame the brokers”, Letters, November 18).

Mr Naylor is correct, of course, because this smacks too much of searching for scapegoats. The competition between banks and lending institutions to write home loans during property booms has a habit of getting out of hand, and this highlights a structural problem which needs to be addressed at a much higher level.

The creation and eventual bursting of land price bubbles has a history of bringing the Australian financial system to its knees at regular intervals, so the Australian Prudential Regulation Authority ought to be pressing for a federal charge on all land values if it is to be effective in tending to the health of the financial system.

In fact, APRA and the Reserve Bank of Australia need to get their heads together in order to demand of our politicians that the RBA administer an all-in flat-rate charge on land values. Such a charge should replace state stamp duties, payroll taxes and land taxes (the latter with their notorious thresholds, exemptions, aggregation provisions and multiple rates), and the revenue delivered, GST-like, back to the states. Maybe the charge ought also to replace the costly GST.

It is not the job of the RBA to hose down the economy by non-discriminating interest rates, but, as with APRA, it is its job to protect our financial system against the creation of property bubbles.

If the RBA tweaked a federal charge on Australia’s land values as assiduously as it has done with interest rates, both APRA and the RBA might finally begin to carry out their appointed duties, instead of seeking to put the blame elsewhere for the ritualistic lead-up to financial collapse.