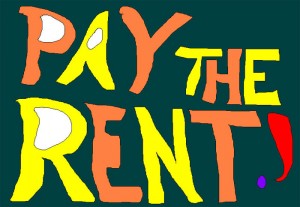 How would you like to be stolen from everyday?  In large amounts?

One way or another, the Australian Taxation Office (ATO) does this to you on a daily basis, either on your income, your purchases – or both.

Of course it counts!

The ATO doesn’t NEED to take your money in this manner. It IS theft!  You have absolutely no duty to be a cash cow for the ATO or the 0.1%.

It’s NOT your public duty, because there is a better ALTERNATIVE – a surplus fund that OUGHT to be tapped for revenue, whereby you’d pay only what you SHOULD pay into the public coffers.

That’s the land rent fund.  It arises when any community comes together.

It’s currently stands about $400,000 billion in Australia–30% of our GDP–and is therefore capable of replacing all taxation at the three levels of government, and then having some left over!

Each of us would pay on the basis of the annual value of the land over which we hold title.  It is a continuing charge for exclusive possession of our land, and, if we only have one parcel of land, all wage earners in the family will contribute to this revenue charge.

Absent taxation and its deadweight, prices of goods and services would fall across Australia.  We would become the most cost-competitive nation on the face of the earth; even better than China or India.  Difficult (or impossible) to believe?

If we ALSO capture the FULL market rents of the minerals, spectra, fishing and forestry licenses we grant, we’d be able to pay an enormous social dividend equally to every Australian citizen, as a universal basic income.

Isn’t this better than being stolen from by the parasitical leeches who currently steal most of our land and natural resource rents?  (That’s WHY we are currently OBLIGED to pay taxation on our comings and goings!)

You don’t think it can be done because the political parties and the public don’t get it?

Tell them about it; make them get it.  Insist we capture our rents – and let’s put the ATO out of business.

We have a current site value assessed at local government level on every property in Australia.  Let them collect it via salary deduction, or in any other manner agreed.  Local governments can keep their part of the revenue, then pass the balance up the line, to the States and the federal government.

The world is having this financial collapse because we’ve failed to capture our public rents.  Doing so, and freeing labour and capital from taxation, will turn the economic depression around overnight for any country undertaking the capture of its land and resource rents.

[That is, the WHOLE rent, and nothing but the rent.]

One thought on “PAY THE RENT”