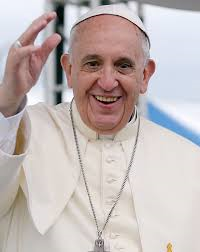 treats privatization as anathema.  For example:

laments a practice of speculation (although doesn’t say of what):

again, another mention of “our common home.”

most significant quote of all for Georgist concerns:

more quotes of a Georgist nature:

“the gift of the earth and its fruits belong to everyone”

another instance claiming that God owns the earth and “human beings [shouldn’t] try to impose their own laws and interests on reality.”

questions the notion of freehold ownership of the earth

and here a somewhat contradictory passage about ownership:

an extensive paragraph about inequalities due to unequal access to the earth!

connections between humanity and the environment can’t be separated, so there should be concern about poverty

concern about the abuses of private property need to be addressed:

the natural environment is the birthright of everyone!

every aspect of the environment and technological applications on it are subject to power and profit goals.

every aspect of human and natural experience becomes part of the economy.

human beings are not the masters of the universe, but the stewards:

138. An inadequate presentation of Christian anthropology gave rise to a wrong understanding of the relationship between human beings and the world. Often, what was handed on was a Promethean vision of mastery over the world, which gave the impression that the protection of nature was something that only the faint-hearted cared about. Instead, our “dominion” over the universe should be understood more properly in the sense of responsible stewardship.

economic growth must be sustainable and designed to assure stable costs:

We urgently need a humanism capable of bringing together the different fields of knowledge, including economics, in the service of a more integral and integrating vision. Today, the analysis of environmental problems cannot be separated from the analysis of human, family, work-related and urban contexts, nor from how individuals relate to themselves, which leads in turn to how they relate to others and to the environment. There is an interrelation between ecosystems and be- tween the various spheres of social interaction, demonstrating yet again that “the whole is greater than the part”.

recognition of the status of land in native cultures:

assumption of natural law — or moral law, as per Henry George

assumes the role of the state is to protect the common good — same as the “commons?”

men own the earth in usufruct, as Jefferson said:

rejects the proposals and practices of buying and selling “carbon credits” (same as cap and trade?). May well endorse Pigou taxes and rental of atmosphere sinks

calls for a revaluation of economic approaches

questions the fixation on profit above all other goals, by implication also of the buying and selling of nature