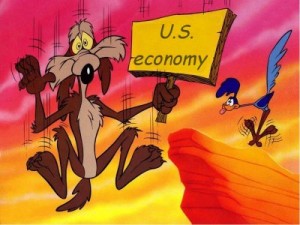 For evidence of this, the slab quoted below is well worth the read:-

“ The Acorn Online had this to say in February 2006, just before the US housing market started to implode:

“The Californian Building Industry Association (CBIA) continues to express alarm over what it calls an ongoing housing crisis in Southern California. Alan Nevin, the association’s chief economist, projected in a 2006 CBIA Housing Forecast that only 185,000 to 205,000 building permits will be granted this year, far short of the 240,000 new homes needed each year.”

“Southern California has been experiencing a massive population boom in recent years and it’s believed that 6 million new residents will be living in the region by 2020. The population increase, coupled with the housing shortage, has the CBIA worried that it will be increasingly difficult for first-time homebuyers to find a moderately priced unit.”

Need we say any more? Of course. We’re not going to pass up an opportunity like this. Now read this press release from the Housing Industry Association (HIA):

“The report finds that if current building trends persist, then Australia’s cumulated housing shortage would reach 466,000 dwellings by 2020… Housing to 2020, which focuses on future housing demand and the number of dwellings required in meeting this demand, highlights a current housing shortage that already numbers over 109,000 dwellings.”

The impact of the so-called shortage? The press release states:

It’s funny isn’t it. All those economists that failed to predict the financial meltdown are the same economists who now say, “Ah, but of course the US had a massive overbuild of housing leading up the financial crisis, that’s why their property market slumped.”

The REIA, the HIA, RP Data Rismark and the Institute of Public Affairs (IPA) have been at the forefront of spreading the same ‘shortage of supply’ disinformation around Australia, because they won’t accept a real estate bubble when they see one.  They’ve become so entrapped in the theoretical principles of a ‘free market’ that they don’t understand that there cannot be a free market in real estate until we slash taxation and capture back a much greater percentage of the annual land value the community creates.  That would indeed allow ‘the invisible hand’ to work in real estate!

But this is “Shock, horror!” to their twisted reality, because to them ‘free enterprise’ includes the power to monopolise, speculate or withold land at the expense of the wider community.  Taxation doesn’t really bother them, because they believe wealthy property owners should be able claw back everything they pay by way of taxation through increments in the values of all their properties.  Apparently, the poor and the middle class should be denied this privilege though.

So, do the IPA, the REIA, RP Data Rismark and the HIA have anything at all to say about the less than 1% of free-loaders who capture the greater part of Australia’s publicly-generated land rent each year, do I hear you ask?  No.  Nothing, nada, zilch.  Strangely, they’re well and truly on side with a few incredibly rich property owners, and quite at odds with all the Aussie battlers trying to buy themselves a home.

I don’t think so …. and unlike them, (disclosure) as a real estate valuer, I did forecast the GFC.

It’s quite revealing to note that the 12 economists who did predict the GFC aren’t all supporters of the ideas of Henry George (who explained the cause and cure of industrial depression in ‘Progress and Poverty‘), but all were heterodox enough to take the wordwide residential real estate bubble into account.  This distinguishes them from their orthodox neo-classical brothers and sisters who’ve never been able to predict anything accurately because they refuse to consider the catastrophic effects of real estate bubbles.

So, what exactly is the purpose of modern neo-classical economists?  Urgers, touts and apologists for real estate bubbles and crashes? To make the GFC appear explicable in terms of being “a natural part of the business cycle”, perhaps?

Obscene!  Where’s the ethics and morality of this standpoint?  Why are churches silent on this?

[That’s got to be the subject of my next blog!]