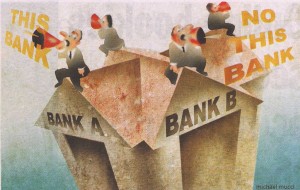 Economic depression: Falling output, rising unemployment and unsold stocks as a result of debt-induced ineffective demand, distinguished from recession by being prolonged and sustained.

Michael West is one of the few journalists with a realistic grasp on where the Australian economy currently stands and where it’s headed.

His installment in THE AGE today demonstrates the complicity of banks in bringing about social and financial collapse, and their expectation of being rewarded by taxpayer bailouts when the inevitable collapse does occur.

Is not the current practice of banks lending against bubble-inflated land prices to make their billions in profits the very definition of obscenity?

What’s that Ian, Mike, Gail and Cameron?  “No evidence of a bubble in land prices?”  What’s this then?