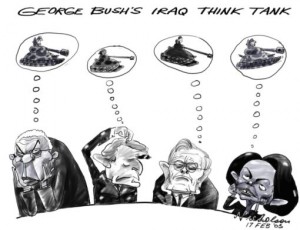 His leadership on ‘Australia’s Future Tax System’ (which has come to be known as ‘The Henry Review’) proves Ken Henry to be the man most likely to raise the level of public policy debate in Australia.  I wish him well in his new role at the Australian National Institute of Public Policy.

The McKell Institute also got off to a flying start with its Homes For All report, proponent Dr Tim Williams giving a very good account of himself in radio interviews, too.

Maybe we’re getting a little balance back into public debate so often determined since the days of Ronald Reagan and Margaret Thatcher by the possibly well-meaning but since proven soulless Ayn Randian right.

Ultimately, it has been the latter’s failed prescriptions which delivered us into this economic depression.

As the right fights to remain the key generator of government policy, it will charge government excess to have been responsible for financial collapse, of course.  It will be partly right, but it has largely been corrective responses to the ailments stemming from absolutist right policies that have bred costly government interventions.

Historic analyses demonstrate successful democracies retain a socially representative core in which the level of government intervention into daily life is determined by the extent to which its policies are fair and reasonable: the fairer, the less need for intervention.

It is to be hoped fledgling think tanks perceive the number one priority. Twenty-first century democracies sorely need to realise the character of a nation is shaped by its system of taxation.

We shouldn’t be about penalising labour and capital.  We need to capture publicly-generated land and natural resource rents to the public purse.

That’s where western democracy has failed us.