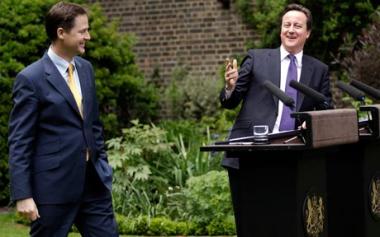 Well, there was David Cameron transitioning into number 10 without so much as a suitcase in sight.

And wasn’t the new found camaraderie between him and Nick Clegg pleasantly agreeable to behold?  You’ve got to wish them both ‘good luck’ in dealing with the UK’s horrible financial plight which almost went missing during the election campaign.

If the Cameron-Clegg team doesn’t discover rent it, too, will be thrown upon the scrap heap of history to which the UK public has consigned a miserable Gordon Brown.

Brown was gracious, almost statesmanlike, during the handover but, regardless of his claim to being one of Britain’s great Chancellors of the Exchequer, Gordon Brown amounted to a political failure, a mere snake oil salesman for 20th century junk economics, a period in world economies that US professor of economics Michael Hudson has described as “The Counter-Enlightenment.”

“Counter Enlightenment”: that is indeed descriptive of the economics that has been permitted to seize us by our ‘user pays’ (never ‘beneficiary pays’) throats because, where classical economic reform had advocated taxing away land rent, ‘modern’ neo-liberal economics has promoted its privatisation through rent-seeking in real estate and mineral resources, converting freeways into tollways (and similarly privatising other natural monopolies), and numerous forms of price-gouging – with the results we now see all about us.  It’s not coincidental.  It’s been a devastating period of false, non-scientific economics.  And that’s the way economics is being taught in our universities, folks!

We’ve allowed the rent the community creates – and which represents the community – to be stolen by carpet-baggers.  As a result, a sense of community has disappeared at the same time rent-seeking by greedy ‘investors’ has replaced productivity and real wealth creation.

The new Conservative/Lib-Dem coalition could take a lead from Australia.

It wasn’t until I took a few days off interstate with my wife, that the enormity of some of Ken Henry’s recommendations for “Australia’s Future Tax System” really sank home.  Whilst away, I was able to see them in a broader perspective.

I wondered to what extent the efforts of Michael Hudson, my colleagues or I may have influenced the panel’s decision, or had they arrived at their conclusions quite independently?  I guess we’ll never know.  It doesn’t really matter.

What does matter is that Australia has taken the first hesitant steps in becoming the hub of a counter revolution in economics – and the Henry Review should be heartily congratulated for the part it has played in that process.

Now to convince timorous politicians, whether in Australia, the UK, or elsewhere, to play their historical part in this counter revolution.

It would be nice to see messrs Rudd, Cameron, Clegg and Obama leave office having solved their economic conundrums in the tradition of David Ricardo, Adam Smith, John Stuart Mill and Henry George, instead of departing the political scene defeated, still clinging tenaciously to the dismal ‘supply and demand’ economics that served Margaret Thatcher, Ronald Reagan and Gordon Brown so poorly.