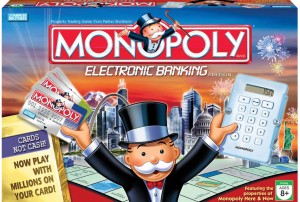 Make no mistake about it, this global financial collapse is not about capitalism. Not at all. We have been playing Monopoly, and lost – badly.

There can be only one winner in the game of Monopoly—The Biggest Rent Seeker—and in the real life version he has won out twice. Once he had taken our trillions by way of mortgage indebtedness, when it became impossible for us to pay him anymore, he even got the umpire to make good his shortfall.  Not bad work, eh?

A new Harper’s Magazine special feature tells us Monopoly was originally invented in 1903 by an actress by the name of Lizzie Magie. It’s a most interesting account.

But Lizzie obviously had a spiritual side to her, because she supported the ideas of Henry George, so she nominated it as “The Landlord’s Game”.

Superficially alter a couple of things here and there, as Charles Darrow did 30 years later, call it “Monopoly”, patent it under your own name (now there’s the typical underhanded real monopoly for you!) and you have a winner in which there’s great fun: something that matches real life a little closer – sending all your opponents to the wall.

OK, Rent Seeker, now that we’ve all been sent to the wall, where does your game go now?

2 thoughts on “MONOPOLY IS THEFT”