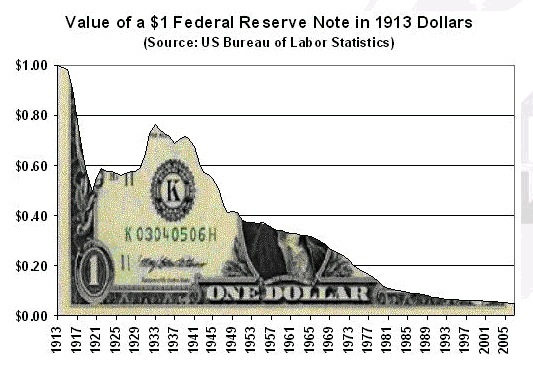 Much of the discussion about money is amazingly similar to discussions about land value tax by people who had never really studied the issue. It becomes, largely, a battle of misconceptions, ignoring the central theories it pretends to dispute.

Even though we know money is not wealth, and that credit is the provision of wealth on faith that there will be a return, people speak of banks extending credit (providing wealth), when they merely issue certificates. It is the people who give real wealth or services in exchange for these certificates who are actually extending credit.

The real credit (giving of wealth for paper) is extended, not because the of creditworthiness of the holder, or even of the banks, but because advanced, sophisticated trade is impossible without money, and this is the only source of money, and because this money is accepted for taxes, and staying in business is impossible unless one can pay one’s taxes.

The absurd argument that a bank does no harm because it lends out its money and recollects it (twice over every seven years), while an ordinary counterfeiter only spends it, has the matter backwards. That is, the ordinary counterfeiter only robs society once, when it issues the money. After that, the money circulates without obligations, and benefits society. The bank, on the other hand, snares people into forced debt, first by lending them what is not the bank’s to lend, and then by removing, as interest, a value that was created by society and rightly belongs to society.

Surely the counterfeiter, if he did not have to act surreptitiously, would find it far more profitable to lend his funny money into circulation once and live off the interest forever than to undergo the risk that attends to counterfeiting over and over again. One cannot get something from nothing, and whatever the counterfeiter or the bank gains necessarily comes at someone else’s expense.

Again, the land analogy appears, as we have all heard that the person who profits from land robbed nobody, because the buyer and seller voluntarily accepted the trade, just as parties voluntarily exchange money.

What is really happening, however, is the private collection of a value that rightly belongs to the public, because the government has defaulted on its obligation to collect that value on the public’s behalf.

Thus, if government were to issue money directly, through spending or per capita grants, and if that were the only money accepted for tax purposes, there would be little point in private bank issuance. Private issues would be spurned by the trading community as unreliable.

That is, checks backed by the fiction of fractional reserve banking would become suspect, and all that would be required to virtually end it (besides the removal of government-backed insurance) is a statement on every check noting what fraction of the money registered to the account is actually in the bank.

Thus, just as Georgism does not prohibit the private collection of rent, but merely pre-empts such collection through public collection, so could Greenbackism allow the private issuance of private money, but would merely pre-empt that issuance by issuing a fundamentally superior public money. Those who would prefer commodity notes, fractional reserve notes or any other kind of notes are free to accept them, but nothing would be so ubiquitously exchangeable as a soundly managed government note, especially if the government itself covered a large trading area and functioned as a sound institution.

Therefore, the only rationale for the issuance of money by private consortiums is the reality that government itself is so dominated by banking interests that it refuses to pre-empt their privilege by doing its job, just as the only rationale for land trust communities is that government does not preempt real estate privileges by collecting the rent.