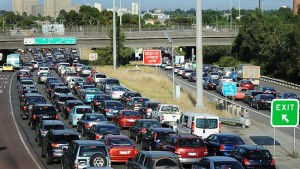 Widening works at the Bolte Bridge entrance to the city, a cement truck stuck in Eastlink’s Melba tunnel, and another having stripped its gears in Montague Street, were sufficient to bring Melbourne traffic to a standstill this morning.

These aren’t unique events in “the world’s most liveable city”. Melbourne’s public transport system, particularly the rail network, is woeful.

As with many of the world’s great cities, the technique of financing public infrastructure from part of the uplift in land values that these capital works deliver has gone missing in Melbourne. We lost it because the rent-seeking property lobby wanted us to lose it; to hide it under the carpet. Their property investments should be shackled with the minimum of municipal rates and state land tax. They believe infrastructure must be funded from other than increasing land values.

Accordingly, Melbourne’s once excellent radial rail system has long languished because ‘we can’t meet’ the cost of expensive new rail connections. Curiously, we’ve usually been able to find monies for arterial roads, even if it meant turning some of these into private tollways. Property investors who had the government’s ear held that users of these freeways and tollways must pay – certainly not the great beneficiaries such as themselves.

And so Melbourne continues to descend into repetitive traffic gridlock.

Paradoxically, even the property lobby would be benefited by an all-in land tax funding a superior public transport system for Melbourne – but it’s too stupid to see it.