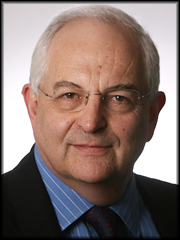 WHY ON EARTH NOT PUT A TAX ON LAND?

“Roads are made, streets are made, services are improved, electriclight turns night into day, water is brought from reservoirs a  hundred miles off in the mountains – and all the while the landlord sits still….To not one of those improvements does the land monopolist, as a land monopolist, contribute…. He renders no service to the community, he contributes nothing to the general welfare, he contributes nothing to the process from which his own enrichment is derived.”

Thus did Winston Churchill explain, in 1909, the morality and the efficiency of taxing land (or pure location), rather than development.

It is moral because owners, as owners (rather than managers or developers), contribute nothing to land’s value. It is efficient, because taxing land distorts nobody’s choices. On the contrary, a tax on site values encourages owners to use what they own more efficiently.

Always desirable, a land value tax is now an idea whose time has come.

As John Muellbauer of the University of Oxford notes, a tax on site values has the following hugely desirable features in contemporary Britain: it offers a tax base that cannot run away, unlike capital or labour; it encourages desired development; it imposes the greatest cost of holding undeveloped land where prices, and so values in alternative uses, are highest; it captures for the public purse a part of the benefits accruing to landowners from investments in infrastructure and other amenities by the public sector; and it makes user costs of ownership of land positive more often, improving the country’s allocation of resources.

The last of these points needs elaboration. If expected capital gains on land are large, because prices are forecast to continue to rise at a rapid rate, the user cost of holding the property becomes negative. The reverse is true where house prices are falling. This makes the cost of land (and so of the housing built on it) lower where prices rise faster and vice versa. This reinforces the movement of economic activity and people towards the most dynamic regions from the least dynamic ones. A national land tax would partially offset this perverse operation of the price mechanism.

Uniform site – or land – value taxation is a “no-brainer”. But what makes it particularly attractive today is its superiority to other taxes now imposed on property.

The council tax and the uniform business rate are imposed on land that is both occupied and developed. These taxes encourage dereliction and discourage development. Council tax has the additional disadvantage of being imposed at higher rates on the cheaper properties in poorer places, thereby reinforcing the perverse regional effects of differential user costs of housing. Again, stamp duty, now at the steep level of 4 per cent on properties worth more than £500,000, is a tax on transactions. But why would anyone wish to lower mobility and reduce liquidity in this way?

What the UK needs, then, is a national tax on the value of land holdings. As is pointed out in the interim report on housing supply by Kate Barker of the Bank of England’s monetary policy committee, discussed here a fortnight ago, Denmark does already imposes just such a tax.

If, as seems plausible, the country should move in this direction only cautiously, the obvious place to start is with the uniform business rate. Prof Muellbauer suggests we could reform the business rate by halving the rate and replacing the lost part with a land value element.

A floor value might be set at, say, £10,000 a hectare, which would exempt most farmland. He also suggests that a tax below 1 per cent a year would be sufficient.

What are the objections to such a modest reform? One would be that it is hard to value the land component in property values. But insurance valuations might be used to place a value on structures, in which case land value is simply total value less the value of the structures on it. Another objection is that such a tax would impose cash costs on people with no incomes. A possibility here, also applicable to current discussions of reform of council tax, is to roll up tax and recoup it when the asset is sold, developed or bequeathed.

In the long run, a national land value tax, at a uniform rate, seems at least a partial substitute for council tax as well. But that would reduce local autonomy and further weaken the incentive for local authorities to promote development. I intend to turn to these topics – local fiscal autonomy, planning and infrastructure provision – in a future column. For the moment, however, the big point is that the taxation of property is a mess. This is one reason the housing market and regional policy work so poorly.

National land-value taxation is a part of the solution. It is both fair and efficient. It should be adopted.