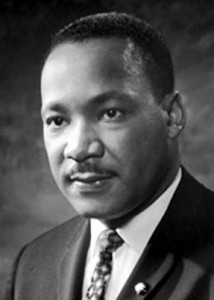 FROM ALANNA HARTZOK AT THE EARTHRIGHTS INSTITUTE:

His “Beyond Vietnam” speech, which he delivered at New York’s Riverside Church on April 4, 1967, as well as his last speech, “I Have Been to the Mountain Top,” that he gave on April 3, 1968, the night before he was assassinated.  Watch/Listen/Read here.

“We are on the wrong side, of the wealthy and the secure, not the poor.”

“These are the times for real choices, and not false ones.”

“Our nation is on the wrong side of a world revolution.”

And the JFK quote from five years before Dr. King gave his Beyond Vietnam speech:

I highly recommend you watch, listen, read the transcript of Dr. King’s speeches.

King’s words resonate as strongly with us now as they did those several decades ago. As economic inequality increases in our country and throughout the world, we still seek to install that deeper justice that King stood for. Here are two of his quotes from our Land Rights course website. I strongly urge you to complete the course at http://www.course.earthrights.net because it is a program detailing deep economics of peace and justice.

“I am sure that each of you would want to go beyond the superficial social analyst who looks merely at effects and does not grapple with underlying causes. True compassion is more than flinging a coin to a beggar; it understands that an edifice which produces beggars needs restructuring.” – Letter from Birmingham City Jail

“An intelligent approach to the problems of poverty and racism will cause us to see the words of the Psalmist – The earth is the Lord’s and the fullness thereof – are still a judgment upon our use and abuse of the wealth and resources with which we have been endowed.” – A Testament of
Hope: The Essential Speeches and Writings of Martin Luther King Jr.PP 629-630.

Lastly, this relevant article from the New York Times, January 15, 2012

HOW FARES THE DREAM?
By Paul Krugman

“I have a dream,” declared Martin Luther King, in a speech that has lost none of its power to inspire. And some of that dream has come true.
When King spoke in the summer of 1963, America was a nation that denied basic rights to millions of its citizens, simply because their skin was the wrong color. Today racism is no longer embedded in law. And while it has by no means been banished from the hearts of men, its grip is far weaker than once it was.

To say the obvious: to look at a photo of President Obama with his cabinet is to see a degree of racial openness — and openness to women, too — that would have seemed almost inconceivable in 1963. When we observe Martin Luther King’s Birthday, we have something very real to celebrate: the civil rights movement was one of America’s finest hours, and it made us a nation truer to its own ideals.

Yet if King could see America now, I believe that he would be disappointed, and feel that his work was nowhere near done. He dreamed of a nation in which his children “will not be judged by the color of their skin but by the content of their character.” But what we actually became is a nation that judges people not by the color of their skin — or at least not as much as in the past — but by the size of their paychecks.
And in America, more than in most other wealthy nations, the size of your paycheck is strongly correlated with the size of your father’s paycheck.

Economic inequality isn’t inherently a racial issue, and rising inequality would be disturbing even if there weren’t a racial dimension.
But American society being what it is, there are racial implications to the way our incomes have been pulling apart. And in any case, King — who was campaigning for higher wages when he was assassinated — would surely have considered soaring inequality an evil to be opposed.

So, about that racial dimension: In the 1960s it was widely assumed that ending overt discrimination would improve the economic as well as legal status of minority groups. And at first this seemed to be happening. Over the course of the 1960s and 1970s substantial numbers of black families moved into the middle class, and even into the upper middle class; the percentage of black households in the top 20 percent of the income distribution nearly doubled.

But around 1980 the relative economic position of blacks in America stopped improving. Why? An important part of the answer, surely, is that circa 1980 income disparities in the United States began to widen dramatically, turning us into a society more unequal than at any time since the 1920s.

Think of the income distribution as a ladder, with different people on different rungs. Starting around 1980, the rungs began moving ever farther apart, adversely affecting black economic progress in two ways. First, because many blacks were still on the lower rungs, they were left behind as income at the top of the ladder soared while income near the bottom stagnated. Second, as the rungs moved farther apart, the ladder became harder to climb.

The Times recently reported on a well-established finding that still surprises many Americans when they hear about it: although we still see ourselves as the land of opportunity, we actually have less intergenerational economic mobility than other advanced nations. That is, the chances that someone born into a low-income family will end up with high income, or vice versa, are significantly lower here than in Canada or Europe.

And there’s every reason to believe that our low economic mobility has a lot to do with our high level of income inequality.

Last week Alan Krueger, chairman of the president’s Council of Economic Advisers, gave an important speech about income inequality, presenting a relationship he dubbed the “Great Gatsby Curve.” Highly unequal countries, he showed, have low mobility: the more unequal a society is, the greater the extent to which an individual’s economic status is determined by his or her parents’ status. And as Mr. Krueger pointed out, this relationship suggests that America in the year 2035 will have even less mobility than it has now, that it will be a place in which the economic prospects of children largely reflect the class into which they were born.

That is not a development we should meekly accept.

Mitt Romney says that we should discuss income inequality, if at all, only in “quiet rooms.” There was a time when people said the same thing about racial inequality. Luckily, however, there were people like Martin Luther King who refused to stay quiet. And we should follow their example today. For the fact is that rising inequality threatens to make America a different and worse place — and we need to reverse that trend to preserve both our values and our dreams.