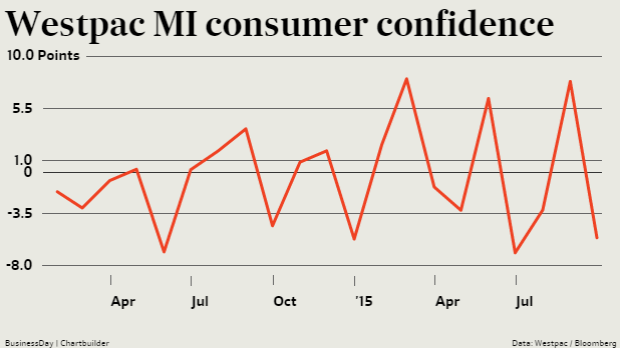 When questioned in federal parliament today about the sharp September decline in the Westpac-Melbourne Institute consumer confidence index, the Treasurer argued that Chinese share market volatility had shaken many Australians.

It is instructive that Mr Hockey now allows that “offshore headwinds” may adversely affect the Australian economy, because the federal Opposition refused to acknowledge this when the Rudd-Gillard-Rudd governments’ performance became affected by the earlier events within the global financial crisis.

The simple point that governments of all persuasions, everywhere, continue to ignore is that all these financial crises are ultimately home-grown, even though an economy may to a lesser extent also respond to events outside its borders.

China is experiencing slowing economic growth and share-market volatility because of her vast property bubble. She cannot maintain her earlier growth rates because there is an inverse relationship between her property bubble and her productivity. (Henry George’s P – R = W + I confirms this point.)

Just as each bubble in the USA, UK, Spain and Ireland brought on financial and economic collapse in their own countries, so must they eventually do in China and Australia.

Trying to ameliorate Australia’s real estate bubble by much-needed tax reform is the fundamental point about which parliamentarians are not permitted to speak. We must maintain the false CON(fidence?) until our bubble bursts. THEN we might try to mop up after the debacle, instead of having tried to avoid it.

So, much more “market volatility” lies ahead!