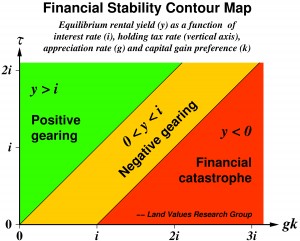 My colleague Gavin Putland has produced a brilliant technical analysis justifying most of what I’ve claimed are the benefits to be derived by the community from the public capture of land rent (the so-called land ‘tax’).

The major stumbling block Gavin puts his finger on is whereas a change “in the ‘land tax’ rate requires legislative change and is regarded as politically impossible, a rise in interest rates requires nothing but the executive decision of a central bank that is not answerable to the voters.”

So, yes, Reserve Bank of Australia interest rate policy might similarly choke off the extent of speculative capital gains to be had from real estate ‘investment’—more particularly in the price of land—but the Bank always fails to employ it when it should, namely, during real estate bubbles.

Also, interest rate policy has proven to be a scattergun approach that affects much more than the property market. It doesn’t discriminate.

Those of a technical bent will be interested to visit Gavin’s exposition. On any reading it leads invariably to the same conclusion, though via a quite different route, to that which Ken Henry’s panel of inquiry came in connection with the Australian tax system—that all-in State land taxes are an essential revenue base.

Property lobbyists might care to note that the place of land value capture in financial stability has now been proven mathematically.