Iraq’s Saddam Hussein was America’s hero when the freedom-loving Taliban were fighting those devilish Russians in Afghanistan, but he had become the devil incarnate by the time America took over Russia’s noble role of fighting those terrible Taliban in Afghanistan.  Er …. huh?

Well, opinion changed once Saddam invaded his neighbour, Kuwait, in 1990, you see?  And he certainly had to be got rid of after September 11, 2001.  Why? Well, the spinmeisters thought we should all know that he had weapons of mass destruction, and also probably designed the carnage at the twin towers on S11.

But what’s that got to do with the Taliban in Afghanistan going from being heroes to being persona non grata? It was al-Qaida, you see: al-Qaida works with the Taliban and was responsible for S11.

So S11 wasn’t really Saddam Hussein’s work, then? No. Nor did rotten ol’ Saddam, who was once our friend, really have weapons of mass destruction at all.  But he did invade Kuwait.  Oh, I see …. er, I think!

But weren’t the Taliban working with al-Qaida before S11?  Yes they were, but they were our friends then.  Oh, OK.

Public opinion can be turned around on a sixpence with a bit of deft perception management, and the west’s fourth estate will usually fall in behind the wishes of the state, in this case, the American government.

I’ve often made the point that a propertied elite, the plutocracy, has for too long called the shots in western nations, all the time working its propaganda that we, like they, are property owners.

That they are less than 1% of the population, and control more land and natural resources by value than the other 99% of us, barely rates a mention in the media, because we seem to know and understand our place: that a wealthy elite has the right to rule over us. We’ll remain happy as long as we can keep shopping and spending.

There’s a country called Greece that has begun to challenge all this nonsensical media spin in the name of democracy.  The people are saying they won’t be paying Greece’s debt to Europe’s banks.

Now that’s a dangerous thing, because democracy shouldn’t be allowed to interfere with privilege. 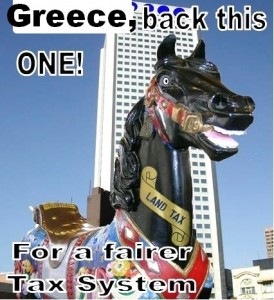