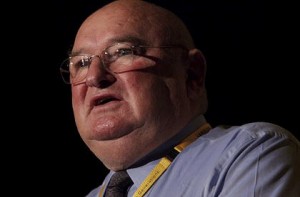 I listened to Lindsay Fox on Geraldine Doogue’s “Saturday Extra” program this morning.

[You may have noticed that politicians, burdened by the requirement to appease either the left or right, aren’t particularly big on common sense.]

The Fox Transport Group has now established itself in Thailand and is looking to expand throughout Asia and the sub-continent.

Lindsay’s approach is to speak to a handful of a country’s key politicians and businessmen to solve his–and usually their–problems.

Fox told Doogue there’s also a need to attend to Australia’s regional areas better than we currently do.

“Give businessmen free land to move into the regions, and abolish their payroll taxes”, he suggested.

Now Lindsay, did you know there’s an international movement that wants EVERYBODY to have free land and abolish ALL taxes?

They’re called Georgists – and they forecast this global financial collapse.

[And I’m sorry, Ron Paul, but you might have to allow just one more ‘ism …. because it actually works.]

Thanks, Geraldine, I enjoyed the program!