Economics is about how we produce and distribute our wealth. This is important because it’s about us: about our daily lives.

But we’ve outsourced economics to economists who don’t understand the role of land within political economy. They’ve put themselves upon a pedestal as high priests of a mathematical nonsense and, not understanding the role of land in how wealth is created and distributed, have failed us. They’re redundant.

Economics has become corrupted and we need to fix it. We do need to act on this, because neoclassical economists shouldn’t be allowed to have the ear of our policymakers and politicians.

Basic land economics is also where organised religion has become corrupted and lets us down. Jew and Christian once understood that the fair and proper distribution of wealth and cheap access to land was basic to human rights and to peoples’ very survival: “The profit of the earth is for all.” (Ecclesiastes 5:9) “The land shall not be sold …” (Leviticus 25:23) However, seeking the acceptance of power and privilege, religions surrendered their mission in order to promote charity instead of economic justice. (That’s working well, guys …!)

Religion’s acquiescence to rent-seekers means they have to come up with some pretty suspect stories: “Christ died for our sins.” Oh, banksters getting Jesus killed had nothing at all to with his having whipped them out of the temple? Wasn’t he reported to have said “I haven’t come to abolish the Law or the Prophets, but to fulfil them”? (Matthew 5:17)

We shouldn’t have to put up with all the crap of economists and religions who confound the use of land. 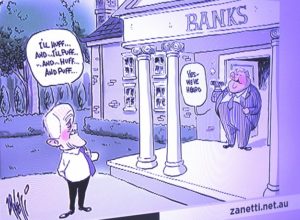