Land rent arises when a community comes together.

It used to be used to build communities: “Put to the vote: as many are of the opinion that a public tax upon the land ought to be raised to defray the public charge, say ‘yea’.” …. “Carried in the affirmative, none dissenting.” (Philadelphia’s first tax law, 30 January 1693)

But now we argue we should each keep our site rent, because we’ve paid for the land. Neo-liberal economic teaching goes along with the gag.

So, as you insist on retaining your land rent – except for that little part you pay in municipal rates and state land taxes – governments have to tax you on your earnings, your food, clothing and shelter, your entertainment, your savings, etc.

Meanwhile, land prices continue to escalate because not enough land rent is being captured for basic community necessities.

Land rent capitalises into bubbles all around the world.

Absent payment of the land rent for necessary government, real estate purchasers have been committing to higher and higher mortgage costs, and paying more and more taxation on their comings and goings.

The banks keep madly extending the credit necessary for people to keep body, soul and mortgages together. Debt loads becomes impossible to repay.

The tax system having given all the wrong signals, and many people being in too much debt to maintain their expenditures, world economies slowly grind to a halt.

Welcome to the second decade of the 21st century! 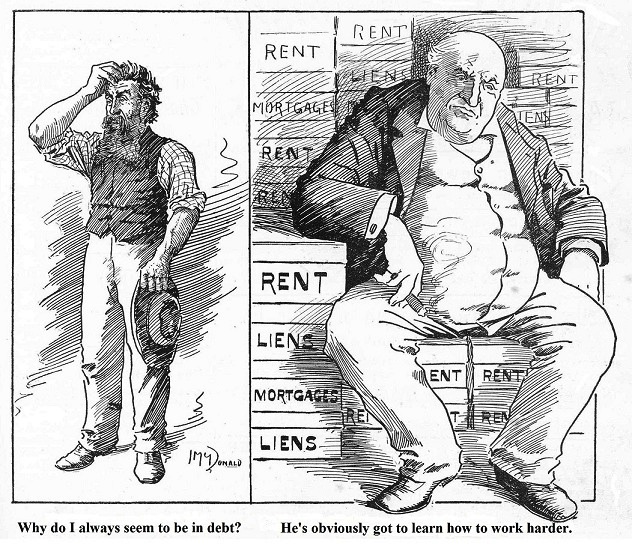