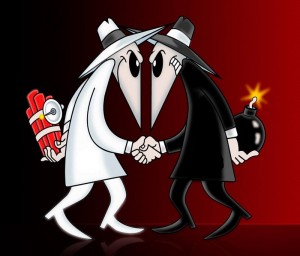 WHAT DO THESE THINGS HAVE IN COMMON?

National governments moving to own, or guarantee, banks

A widening gap between the rich and poor

Protests in Canberra tomorrow about the importation of New Zealand apples

Few people concerned with any of the items on the list define the FUNDAMENTAL situation correctly. I’ll use the last item on the list to make the case.

Apple growers are obviously concerned about importing the apple disease, fire blight, if New Zealand apples are permitted into Australia. New Zealanders don’t allow our apples to be imported because of the possibility of importing our fruit flies, so why should we risk introducing their fire blight?

But isn’t the pre-eminent concern about what the importation of apples might do to the local apple industry? Is fire blight as likely, or as common, as fruit fly? Isn’t the opposition to importing apples mainly because the New Zealand dollar is cheaper than ours, therefore their apples might be able to be brought to our markets cheaper, and out-sell Australian apples?

Why is our dollar and our labour dearer than New Zealand’s? Might it have anything to do with our taxes and land prices being higher, therefore (as with Chinese goods) we are unable to compete with them?

OK, maybe we don’t want to risk importing fire blight, but the “protectionist” argument against other imports usually comes back to Australia’s relatively higher taxes and land prices generating our uncompetitive labour costs.  (I showed in the second-last blog how we can have higher wages without higher costs.)

It’s little understood that Australia has the dearest land in the world, and that our tax regime blatantly encourages the pathology to infect the whole economy. Despite the fact that land price can disappear overnight, banks then proceed to lend against it.

In considering any item on the above list, it’s only when we come to appreciate that current tax regimes act to inflate land prices that we can begin to find solutions to it – and to the world’s deepening financial crisis.

Land and natural resource charges represent the antidote for the enemy within the gates – which is not just the financial crooks, but the main enemy of economic prosperity – taxes and land prices.