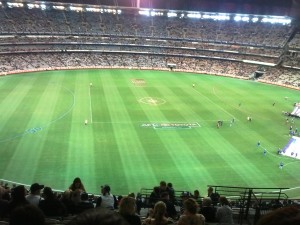 It was a satisfying experience to be one of the 85,000 at the ‘G’ last night to cheer on the Cats in their 96 point drubbing of the ’Pies. Their ten goal second quarter set up the win, Kelly and Menzel displaying supreme skills. Ben Reid was one of the few Collingwood players who could leave the ground with his head held high.

Now for the finals, Cats!

Another win on the day came in the form of a good review of Prosper Australia’s new documentary film “Real Estate 4 Ransom” by Chris Vedelago in THE AGE.

It was nice, too, to meet Philip Soos, author of the insightful paper “Bubbling Over”, at an enjoyable 120th Henry George commemoration dinner on Thursday night.

A pleasant end to the week altogether.