The narrative of The Depression blog is that the growth (or decline) in real estate price turnover actually leads and directs the economy.

I argued the case in a report “Unlocking the Riches of Oz: A case study of the social and economic costs of real estate bubbles 1972 to 2006” which was released in 2007, just before the US residential real estate bubble burst.

Although the facts are quite clear, economists sidestep this analysis, claiming that real estate bubbles are a factor of the undersupply of land. Inadequate suitably zoned land explains these bubbles, they say, but they have no explanation for what caused land price bubbles before town planning and zoning came into existence, not all that long ago.

Could it be that economists are ignorant of the Theory of Real Estate Valuation? i.e. that the phenomenon of land price is simply the capitalisation of its net annual rent? And, therefore, greater public capture of land rent via municipal rates and state land tax would keep the lid on recurrent land price bubbles? 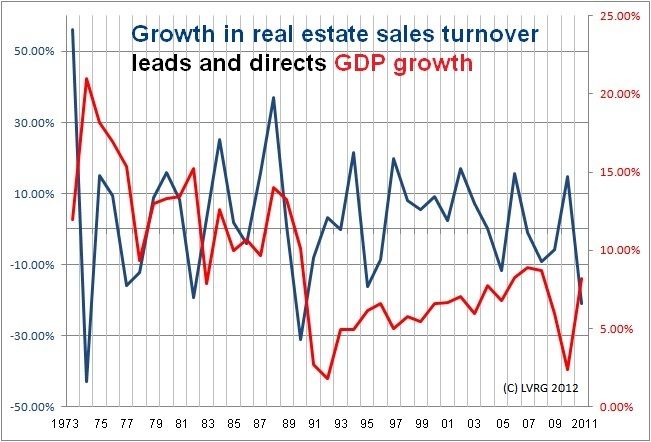 The second chart states the obvious: if real estate is doing better than the economy, guess in which direction the economy is headed?

The utter economic stupidity, hidden not only by neo-classical economists but also by the crass diversions in Australian political life, could of course be rectified by putting into place the recommendations of Ken Henry’s inquiry into the Australian tax system.

Fat chance when economists don’t understand the Theory of Real Estate Valuation, and when politicians have become as useless as tits on a bull. 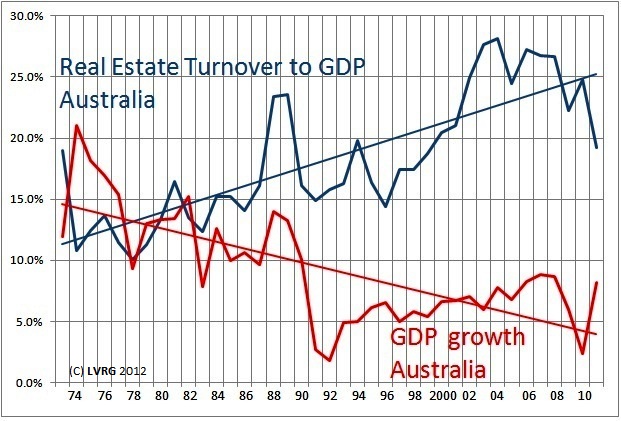