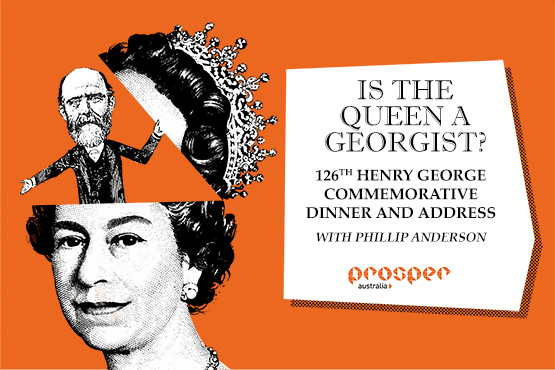 SHE PAYS THE RENT ….

In 2015 the Crown Estate delivered a record £328.8 million to the Exchequer from its thirty wind farms and central London assets.

This was up 8.1% on the previous year, taking the total the Estate has returned to the Treasury over the last decade to more than £2.6 billion. The capital value of the overall estate increased by 2% to £13.1 billion.

…. AND RECEIVES HER “CITIZENS’ DIVIDEND” FOR SO DOING!

DOES THE QUEEN REALISE THIS IS GEORGISM IN ACTION?

It’s a great pity the 300 acres of Mayfair and Belgravia held by the parasitic Duke of Westminister in the Grosvenor Estate doesn’t do similarly: or, for that matter, the other six or so aristocratic London holders of great estates. 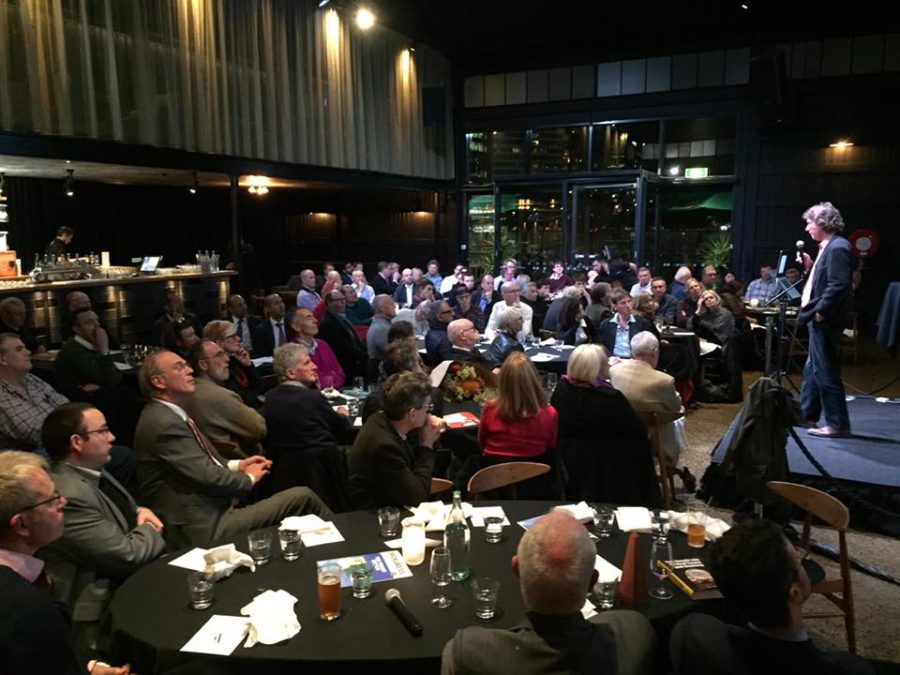 Such were among details delivered to the audience of one hundred in an entertaining 126th Henry George Commemorative Dinner & Address delivered by Philip Anderson of Cycles, Trends and Forecasts at The Woolshed in Melbourne last night.

Anderson explained the eighteen-year real estate cycle, due for another calamitous bursting in 2026 (can the Australian bubble hold out until then?) and gave insights into WD Gann’s remarkable stock market cycles.

President Catherine Cashmore provided the audience with an account of Prosper Australia’s involvement in assisting the states of Victoria and New South Wales with some of Prosper’s statistical techniques relating to the Australian property market.

Anne Schmid was presented with a bouquet of flowers for her twenty years of devoted service as Prosper Australia’s secretary. Anne is to remain on the executive committee after handing the key position over to Bill Payze during the year.

Was it EJ Craigie award winner Adam Creighton from The Australian who suggested no other Australian body could possibly boast holding 126 consecutive annual dinners?  Creighton won the 2017 award from a field of four other nominees for a challenging piece of writing on land tax’s positive potential to address the issues of our times. (The article is reproduced below *).

Prosper Australia’s Project Director Karl Fitzgerald is to be congratulated for organising a most enjoyable event.

The person goes on: “Roads are made, streets are made, services are improved, electric light turns night into day … and all the while the landlord sits still. Every one of those improvements is ­affected by the labour and cost of other peoples and the taxpayers.”

Actually, it was conservative Winston Churchill, speaking in the House of Commons in 1909. Scion of a powerful landowning family, he would have had personal insight into the level of ­effort and innovation required to inherit and manage property.

Churchill was, however, only making, colourfully, one of the most powerful arguments in ­economics. Taxing the unimproved value of land, at a low flat annual rate, is the most efficient, and even moral, way of raising revenue.

It’s efficient because taxing land won’t reduce its quantity. Plus, land can’t be hidden or shifted. Sydney’s eastern suburbs can’t be towed to the ­British Virgin ­Islands and putting it in a trust or bucket company would be about as helpful as a giant tarpaulin.

Taxing land is likely to lower rents, too, by bringing swaths of unoccupied accommodation to market.

About half of Chinese investors in Australian property, for ­instance, are leaving their properties vacant, according to a recent survey by UBS.

In a world of increasingly malleable and mobile income — and indeed workers themselves — these arguments have never been so relevant.

“A land tax is not only harder to avoid and more efficient, but also surely more equitable, since the ‘social dividend’ that accrues to land owners, particularly in our major cities, simply via the effluxion of time as growth occurs around them, is really impossible to justify,” said former Treasury secretary and renowned conservative John Stone, in a recent interview with The Australian.

In the four years to last March, the value of Australian households’ land (excluding the houses and apartments that sit on it) has surged 52 per cent to $4.7 trillion. For context, that’s about eight years of total federal income tax receipts.

A flat 1 per cent land tax, which might cost an average Sydney homeowner about $7500 a year, would raise enough cash to ­abolish income tax for about 70 per cent of taxpayers, or, alternatively, hugely reduce marginal ­income tax rates. Depending on his circumstances, the Sydney­sider would be better off.

Isn’t it silly to squeeze the pips out of workers earning more than $180,000, who may well have little wealth to their name, yet leave massive, unexpected appreciations entirely untaxed?

If a federal income-land tax swap is too ambitious, at least state governments should follow the ACT’s lead and shift away from stamp duties on property, which massively hobble the ­efficient allocation of assets.

A credit for any stamp duty already paid would ensure no one is taxed twice. Perhaps buyers could also be given a choice between paying stamp duty on their new property, or land tax, after which time the property would forever be a “land tax” property. Asset-rich, cash-poor landowners could elect to pay out of their estate.

“If you reduce stamp duty and had a broadbased land tax we would encourage the transfer of property, there’s no doubt about that,” said NSW’s new Treasurer Dominic Perrottet, when he was finance minister. “You have retirees living in these five-bedroom homes by themselves while there are people with three children trying to buy into the property market,” he added, promisingly.

He’s right. A report commissioned by the NSW Treasury last year estimated that abolishing stamp duty — presently about $42,000 on a median Sydney house worth $1.02 million — would boost the number of property transactions in the state by 25 per cent, freeing up spare ­bedrooms equivalent to 70,000 houses.

So, you say, if a comprehensive land value tax is so good, then why don’t we have one?

Here’s a clue: the burden of a land tax falls entirely on landowners, who naturally tend to be more politically influential than their raw numbers would suggest. ­The Treasury analysis referenced above, conducted by Peter Abelson, found house prices would fall 6 per cent over the ­medium term in response to a 0.7 per cent annual land tax (enough to replace stamp duty ­entirely).

Shifting to land tax won’t be easy in a country where about two million people own at least one investment property, even if, in reality, the hit to prices would manifest itself in slower appreciation. But as for smokers, it’s never too late to quit.

Speculating on land values, which has become a national pastime, isn’t especially productive. It’s hard to see how it will help Australia sustain its prosperity into the 21st century, especially, as is likely, the value of our resources exports starts to fall again.

Fortunately, both major political parties could get behind a land tax. Mr Perrottet and Mr Churchill’s insights aside, a Liberal Party that wants to tax effort and innovation less might have to tax land more.

As for the Labor Party, a comprehensive flat rate tax on the unimproved land was part of its platform from 1891 to 1905. The founders of the party were well aware that inherited land escaped taxation.

Churchill was making an argument for the common good that probably didn’t suit his or his electors’ short-term personal ­financial circumstances.

It would be good to see more of that today.