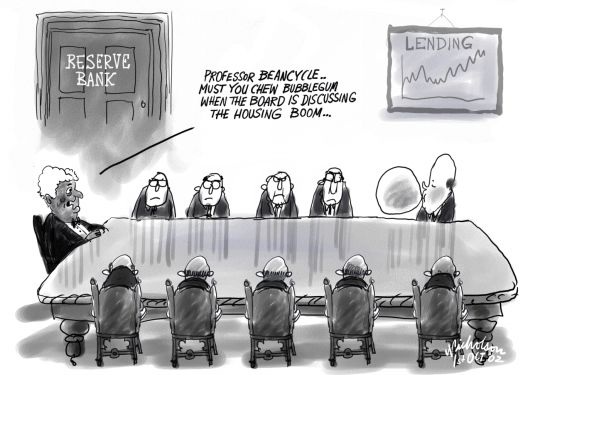 So, the Reserve Bank of Australia has wrongly left the cash rate on hold – again.

Whilst it still wrestles with the likelihood of inflation, l might remind the RBA’s boffins we’re actually in the deflationary half of a Kondratieff wave. So inflation’s definitely NOT a problem. Yet.

As this site has tried in vain to explain to the RBA, the world is currently tanking into an economic depression as prices decline, and debt—which is far less worrisome in inflationary times—now becomes a super-heavy millstone around peoples’ necks. So, the hyperinflation is a way off yet, Glen Stevens and Co.  This is the debt deflation phase.

The end of the depression will define the period of this particular K-wave which, having its birth at the end of WWII, is a longer one than usual – but that’s for explanation in another post.

BTW, I have a far better record than the RBA on interest rate policy. In THE AGE on 15 June 2005, I believed then RBA governor Ian Macfarlane may have been on the right track:

“In the week ended June 3, Treasurer Peter Costello warned that the Reserve Bank of Australia should not increase interest rates. Early the following week, the RBA seemed to have listened.

However, Costello’s advice may have been redundant in the current deflationary environment, because the next adjustment of Australian interest rates would more properly be down.”

A forlorn hope! The RBA, hopelessly enmeshed in daily minutiae and blind to long term analysis, incredibly ratcheted the cash rate up 1.75% in the two years from May 2006 to March 2008—from 5.5% to 7.25%— before acknowledging its errors and slashing interest rates a massive 4% in the six months to February 2009.

My analysis had been vindicated: over the period, the drop in the cash rate had been 2.25%, from 5.5% to 3.25%. For now, that should remain the direction of the RBA’s overnight rate.

Hey, RBA! I’m available for consultation at a reasonable fee. I know what’s going on, because, unlike your economists, I do understand the wreckage this enormous land price bubble has inflicted upon the Australian economy, and what should be done about it.

3 thoughts on “INTEREST RATES ON HOLD”