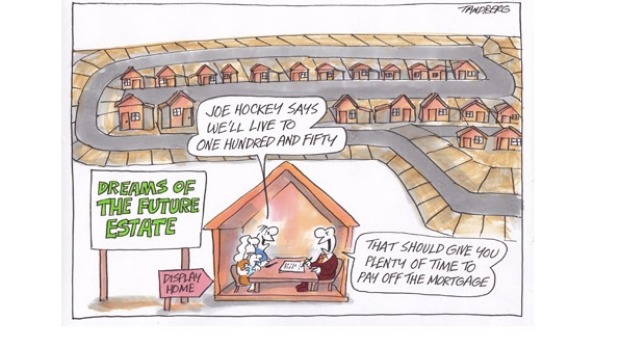 THE MORTGAGE (Apologies to Will Carleton)

We signed up for a mortgage, thanked the banker for his help,
(Our heads inside the noose without so much as a yelp!)
The seven hundred thousand for a four-bedder with en-suite
In the outer ‘burbs of Melbourne seemed to make my wife and I complete.

The leased two bedroom was long forgotten when Jenny started school
And Clayton then in child-care as our two incomes we had to pool
To meet the seven times our income the mortgage costed us
Which, with food and clothing, didn’t leave us very much.

We battled on regardless, in the true blue Aussie way
As the economy began to worsen and my wife received no pay
When her company went belly up at the beginning of the year,
And for the first time the kids began to witness our arguments and fear.

With little off the mortgage and the cards all maxing out,
Debt became the spectre that downed us with its clout.
What on earth had happened to family joy and conversation,
… Replaced by uncertainty, fear and desperation?

The marriage is looking shaky and the kids seem to know
That something bad has happened to our once happy little show.
Me?  I think it was the mortgage that really broke our heart,
I now see it wasn’t payable – not even from the start.