Although the Henry Tax Review’s federal land ‘tax’ recommendations would permit the abolition of a number of quite damaging Australian taxes, Treasurer Wayne Swan announced in May 2010 the Rudd Labor government wasn’t contemplating introducing them. Along with the one percent, errant banking and real estate industries shared a deep sigh of relief. 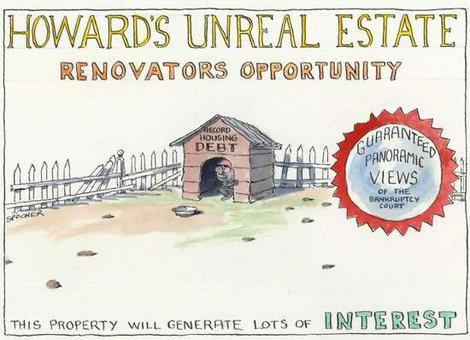 From 1996 to 2007 Liberal Party Prime Minister John Howard–aided and abetted by his Treasurer Peter Costello–presided over developing the greatest real estate bubble in Australia’s history, but Labor decided it wasn’t about to tame the bubble. Any such action was considered to be too close to home (so to speak). So, Australians would have to take what’s coming – and it mightn’t take place on Labor’s watch, anyway.

So much for principle.

One hundred years after introducing a federal land tax in 1910, the once great Australian Labor Party had done a volte-face, and both major parties were now on common ground, actively promoting the continued privatisation of publicly-generated land income.

What will be the practical consequences of the political parties failing to address the Australian bubble in land prices?

They ought to be obvious because we’re currently witnessing many of them overseas.

First, we need to see there’s a demonstrable counter-relationship between rapidly rising land prices and productivity. Once this is understood, the collapse of the US and European financial systems should no longer remain a mystery – although judging by the poorly chosen actions of governments and their reserve banks across the globe, the fact does appear to have escaped them.

It’s simple. A crisis in production follows close on the heels of financial collapse, and social distress will then ensue on the homefront as private debt comes home to roost and a lack of effective demand comes into play.

Half-hearted post facto attempts to capture some of the economic rent of land in the UK, Greece, Ireland, and elsewhere–even China has begun tinkering with the idea–will only bring about half-hearted results.

As Australia remains behind the curve with its still unburst property bubble, it has an unequalled vantage point to learn from the misguided political reaction of other nations.

However, with neither major political party in Australia supporting Ken Henry’s thoughtful proposals for tax reform–which would clearly unburden labour and capital and curb our gargantuan appetite for real estate speculation–we have no reason at all to believe we’ll come out of this well.

Our politicians meanwhile continue on with their nonsense and misrepresentations.