Listening to Prime Minister Tony Abbott, it is clear his “mature debate” on tax reform amounts to Australians accepting that the GST must be extended.  Institutes, such as the Grattan, may whisper about the possibilities of a land tax, but they then shout about the need to remove the existing GST exemptions.  (Of course, Grattan is funded by governments and banks!)

As mainstream media has acceded to the call to increase our revenue from the GST, the electorate seems to have taken up the idea by osmosis, because no serious discussion has taken place on the benefits of an all-in, single rate land tax.  So, who really cares if increasing the GST will pillory people with no ability to save?  Who cares that study after study has shown land to be one of the most efficient tax bases of all, can’t flee to tax havens, and that a tax on land cannot be passed on in prices?  But it’s too hard for politicians – especially when they have proven to be very keen ‘property’ investors.

One key point never comes up:  we’ve experienced world financial collapse because of burst real estate bubbles–except in Australia, Canada and China–but we’re nevertheless unprepared to undertake a fiscal measure that would keep a lid on the escalation of land prices.  Why is the property market divorced from the study of economics?*  Passing strange, or just plain stupid?

As if to underline the obtuseness of the mainstream commentariat, this morning on the ABC’s “Insiders”, the Sydney Institute’s Gerard Henderson opined that we should be concerned about Australia’s public debt level, which is amongst one of the lowest in the world.  [!]

No, Gerard, it’s our private debt, represented predominantly by mortgages, about which we need to worry, those trillions we’ve shunted into the current unburst Australian property bubble since 1996 (as shaded grey in the chart below).  Many thoughtful people have already discerned the potentially disastrous fallout should the Australian bubble burst, but these remain a minority.  They will need to be a vocal minority if an increased GST is not to become a reality.

The practical need is not an extended GST.  We need to take up Ken Henry’s recommendation for the abolition of 120 taxes, for the introduction of an all-in land tax and a federal mining tax.  But there’s nobody in the commentariat with the wit nor fortitude to promote such deliberately well thought-out ideas.  Why not?  Too hard?

This is the moment for genuine revenue reform in Australia. 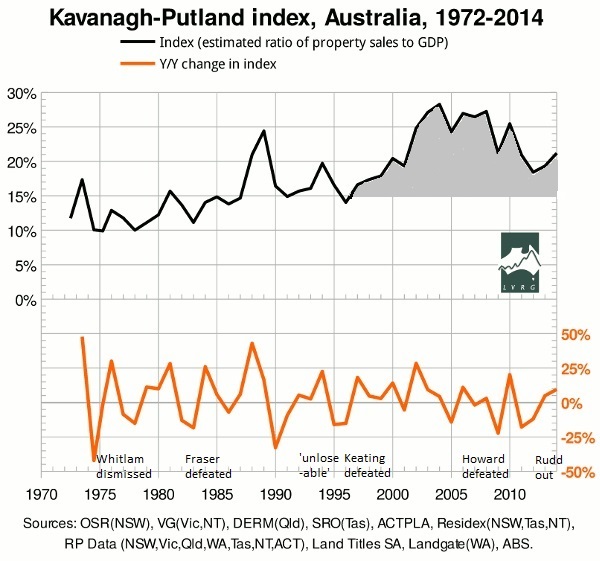 *“The theory of valuation is a pragmatical extension of economic theories relating to value and price, but it is remarkable to find that there is an almost complete dissociation between economic theory and the theory of valuation, although the latter from the materialistic viewpoint stands in the forefront of the social sciences”. – Dr JFN Murray, “Principles and Practice of Valuation”, Commonwealth Institute of Valuers, Sydney, 1969, Fourth Edition, pp. 79, 80